Watford are set to face a battle to keep striker Troy Deeney according to Sky Sports. Aston Villa and Newcastle United have identified Deeney as a top target as they hope to bolster their attacking options whilst Swansea City are also reported to admire the 25-year-old. There are also a plethora of Championship clubs who are also interested in the ex-Walsall man including Norwich, Fulham, Wigan and Nottingham Forest. Watford will face a challenge to keep their top striker at Vicarage Road and they may be tempted by a big money offer for the frontman who has netted more than 40 goals in the last two seasons.

The Bournemouth Echo are reporting that Bournemouth have had a seven-figure offer for Coventry striker Callum Wilson turned down. Wilson scored 22 goals in 41 appearances for the Sky Blues last season and he is thought to be valued at between £2million and £3million. Coventry have publicly stated their desire to keep the 22-year-old at the club but a substantial offer could be enough to test to club’s resolve. It is believed that Nottingham Forest and Wolves are also are tracking the youngster and it is likely that they will follow up their interest with a formal approach in the near future.

Derby step up interest in Thorne

Both the Derby Telegraph and the Birmingham Mail are reporting that Derby have had a bid for George Thorne rejected. Derby have already made it clear they are interested in signing the 21-year-old following a successful loan spell last season but West Brom have once against stated that Thorne is not for sale. Albion’s technical director Terry Burton has said that West Brom are not looking to weaken their squad but strengthen it however the club may listen to improved offers if Derby are willing to up the ante.

Fulham are set for striker Marcello Trotta and goalkeeper Maarten Stekelenburg to leave Craven Cottage following relegation to the Championship. Trotta, who spent time on loan at Brentford last season, submitted a transfer request last week and Fulham are willing to listen to any offers for the Italian U21 player, according to Get West London. Get West London are also reporting that Stekelenburg is being linked with a move away from Fulham following an unsuccessful first season for the Cottagers. The ex-Roma ‘keeper has said that he will decide his future when he returns to Fulham for pre-season at the end of June. 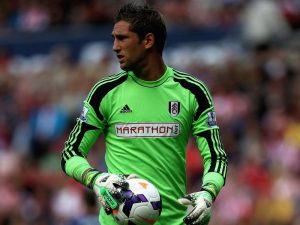