As always with another weekend of football in the Championship, it brings a weekend of shocks, surprises and outstanding moments. From cracking goals to contentious decisions we are left with plenty to talk about from the Championship action this weekend.

Leicester have finished the job 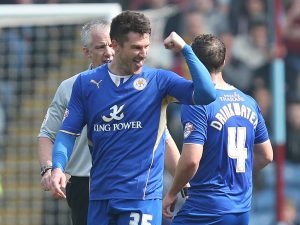 It is all but a mathematical certainty now. Leicester travelled to Turf Moor in Saturday after some indifferent performances that saw them manage consecutive draws away at Blackburn and home to Yeovil in midweek. This would not have been noticed on Saturday,  however, as they put in one of their best team performances of the season to overcome Burnley. Most things weny in favour of Leicester as Burnley striker Sam Vokes picked up a self inflicted injury and had to be replaced. This along with the absence of injured star pair Danny Ings and Kieran Trippier made Leicester’s task more favourable. An injury to Jamie Vardy was a set back and it took a great finish from David Nugent and goal of the weekend from Chris Wood to secure the points. Leicester are now 6 points clear of Burnley, and QPR are a further 9 points back. With a game in hand over the chasing pack the Foxes need just 7 points from the 24 available to secure promotion. Leicester are 1/750 to gain promotion and 1/50 to claim the Championship title.

Bournemouth are no longer a dark horse

Whilst the probability of Bournemouth making the play offs still remains slim, with just 5 points to make up and games against 4 teams in the current top 8 to come they are no longer under the radar. The 4-1 win against Leeds was dedicated to the fans by manager Eddie Howe, but his side did not stop there racing off to a 3-0 lead within half an hour at St Andrews against Birmingham. Lewis Grabban was at the heart of the Bournemouth goals setting up the first, before scoring the next two. The pick of the bunch came in the second half when Ian Harte’s corner made its way back to the former Republic of Ireland international who beat his man and then produced a trademark left foot effort that nestled into the top corner. It did not win the72 goal of the weekend, but would have won celebration of the weekend where Harte suggests his foot is on fire. Give it a watch below. The win means with Reading, Forest, Brighton and Ipswich dropping points the Cherries have a right to be optimistic. If they can pick up results against the 3 of these sides which they play between now and the end of the season it could do right down to the wire. Bournemouth have had a great month taking 19 points in March and a similar total in their final 7 games is could be another season to remember on the south coast.


Barnsley closing the gap, but Yeovil are on the brink

I am not a fan of the phrase “6 pointer”, although Saturday’s clash between Barnsley and Yeovil was as close as a game will be to being worth 6 points. Neither side could afford to lose, but a win would be a valuable commodity against a fellow relegation rival. Barnsley seemed up for the fight just that little bit more than Yeovil. Their confidence was flowing after the midweek win at the Madejski and controlled large parts of the game at Huish Park, whilst Yeovil seemed tired after battling hard for a point at Leicester. Two quick goals put the game to bed just after the break and despite a glimmer of hope through a Luke Ayling goal, Barnsley netted twice more to pick up an emphatic win. Charlton still have two games in hand over Barnsley and 3 over Yeovil, therefore for the time being both sides will be looking towards Birmingham in 20th. The Tykes, with a game in hand over Birmingham, are 5 points behind the Blues. Meanwhile, Yeovil returned to the bottom of the Championship table and need a lot to go there way if their Championship status is going to be sustained next season.

Blackpool finally out of the rut

How Blackpool’s season has gone downhill. Just 2 defeats in their first 17 league games had fans dreaming of promotion. In the next 17 games the Tangerines did not win a single game and collected only 4 points. However, after a far from electric start Barry Ferguson has got the threadbare Blackpool squad playing for the shirt once more. On the cusp of the relegation scrap, the players got some much needed results winning at home to Millwall and Huddersfield. These results showed progress, but the draw at Loftus Road showed signs of that excellent early season form. Blackpool took the lead after just 11 minutes when David Goodwillie headed home. It looked like Blackpool had successfully taken all 3 points until Junior Hoilett denied a third win in 5 with a 25-yard strike. Blackpool are not completely safe yet with big games against Yeovil and Charlton still to come. They do, however, have plenty of quality in the squad and have tightened up their leaky defence recently becoming much harder to beat. They should have more than enough to be safe.