Fans of the Weekend 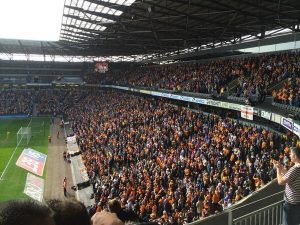 Taking 9,000 fans away from home is a pretty astounding number and credit to the Wolves faithful for travelling in enormous numbers to the Stadium MK to see them take a deserved 1-0 win against Milton Keynes Dons.
Kenny Jacket’s men have been excellent all season long and it’s been buoyed by their support both home and away, the point was especially emphasised this past weekend. It’s great to see a side rise to the occasion of such a great away support, but it’s also kudos to MK for allowing that many fans to travel.

Goal of the Weekend

There was quite a few decent goals this weekend, but this one was just that little bit special. While many might feel there was a considerable push for Wood to get the ball in the first place, you can take absolutely take nothing away from the finish.

The ball sat up perfectly for the New Zealand international, who volleyed the ball from over 20 yards out, looping over a helpless Tom Heaton in the Burnley goal. It helped seal an important win that sees Leicester closer to the Premier League and closer to the Championship title.

Upset of the Weekend

In a slightly unspectacular weekend, probably the biggest upset was mid-table Bradford City beating promotion pushing Leyton Orient in their own backyard. While the Bantams didn’t blow Orient away, it was a very good result for a side looking to stay as far away from relegation as possible.

It was a huge blow for Orient, who are now four points off Brentford who have two games in hand and only a point above Rotherham who have a game in hand, this could have spelt the end of their automatic promotion dreams. As for Phil Parkinson’s men, it’s allowed his team some breathing room with just 7 games to go.

Player of the Weekend

There weren’t many outstanding individual performances to pick from this weekend, many either didn’t affect the result or were more of a team performance, but Callum Wilson really helped Coventry to a win against Crewe.

League 1’s top scorer managed to bag another brace at Gresty Road, helping his side to a 2-1 victory over struggling Crewe. Two quality finishes helped keep the Sky Blues away from trouble, as his goals have all season, whilst plunging the Railwaymen back into the relegation zone.

Team of the Weekend

Congratulations to Darren Ferguson and his team for winning the Football League Trophy in what was a very entertaining final. Two goals from set pieces and a Britt Assombalonga penalty ensured the Posh saw off League Two side Chesterfield for a 3-1 victory despite going down to 10 men.

The Spireites certainly gave them a game but the difference on the day was that the chances that came the League One side’s way were dispatched emphatically. It’s the first major piece of silverware in the club’s history, an excellent achievement for the club who will now want promotion to be the cherry on top of their good season so far.