With Chesterfield playing in the JPT Final at Wembley on Sunday, only five of the six teams from South Yorkshire played in their respective leagues on Saturday. Barnsley, Doncaster Rovers and Rotherham United all picked up three points against Yeovil, Leeds and Bristol City respectively. However, both Sheffield clubs, United and Wednesday, slipped up and picked up nothing but their sorrows after losing away at Swindon and at home to Watford.

Two teams in desperate need to pick up points from the remainder of the season are Barnsley and Yeovil. The visitors were in better form coming into this tie after an impressive 3-1 victory at Reading midweek, however, the hosts haven’t won a game, home or away, since the 8th of March, after they beat Sheffield Wednesday 2-0 at Huish Park.

Barnsley broke the deadlock but it took until the second half for the goal to come. Chris O’Grady firing home from inside the box past keeper Stech. Barnsley doubled their advantage ten minutes later. The ball fell to Liam Lawrence who struck it into the bottom right corner.

Gary Johnson’s men were not going down without a fight, and pulled a goal back through defender Luke Ayling. His shot from inside the 18 yard box nestled its way into Steele’s bottom corner.

But it was Barnsley’s day. O’Grady regained the Reds’ two goal cushion only five minutes after Yeovil’s goal when he fired home from inside the area. And Barnsley made it four after Dale Jennings scored his second in as many games to put the Reds level on points with 21st placed Charlton.

Affairs at Leeds United seemed to have had an effect on their performance on the pitch. Only picking up three points from their last six games is hardly good form. In comparison, Doncaster Rovers seem to be going from strength to strength. They’ve only lost once in their last six games, winning four of them, and drawing the other one.

Winger David Cotterill scored the opening goal after a corner from teammate Wellens found him on the right hand side of the penalty area. He made no mistake in converting past Butland. Billy Sharp made it two on the stroke of half time. He drove home a shot into the bottom corner from inside the area.

Leeds made a game of it when Ross McCormack headed home from inside the area. But Rovers hung on to the win which leaves them eight points clear of the drop zone.

Sheffield Wednesday seemed to fall to pieces without head coach Stuart Gray, who was at his sons wedding. Three wins and three losses in their last six games is considered good in the blue half of Sheffield, considering they had won only one game in seventeen at the start of the season under former manager Dave Jones.

A play off place seemed unlikely for Sannino’s Watford, however, that didn’t stop them hammering four past the Owls. The Hornets were in control from early on in the game after Gabriele Angella scored from close range to put the visitors in the lead. Lewis McGugan soon made it two when he headed home past keeper Chris Kirkland. An early second half goal followed when Troy Deeney ran through one-on-one with Kirkland and casually passed the ball into the empty net once the keeper had committed himself. Deeney then made it four when the ball broke to him inside the six yard box after a goalmouth scramble. All he had to do was help the ball on its way to the net.

The Owls did get a consolation goal when Benik Afobe nodded home a Liam Palmer cross, but the Hornets left the Owls stinging.

Miles Storey broke the deadlock seventeen minutes in when he had a shot from inside the box that flew into the left corner of keeper Howard’s net.

The Blades didn’t seem in the game in the first half, but livened up a little in the second. They reaped the rewards when Kieron Freeman’s cross found skipper Michael Doyle, who only had to tap the ball home to score an equaliser.

However, late drama followed. Clough’s men thought they had the ball in the back of the net,  but the referee had pulled play back for a free kick. From the delivery, Liverpool loanee Conor Coady made keeper Wes Foderingham produce a fine save to prevent the Blades going home with all three points. But, the drama wasn’t over. From the chance, Swindon countered and Louis Thompson ended up finishing the game with a goal for the home side as he nestled his shot into the bottom corner of United’s goal. 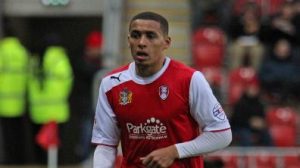 Rotherham United find themselves sitting in a comfortable play off position after a 2-1 victory over 15th placed Bristol City.

The Millers’ took the lead early on when James Tavernier scored a second minute goal from outside the box which flew into the top left corner of Frank Fielding’s goal.

Wade Elliott equalised for Bristol City, who have struggled this season, after his right footed effort found its way past Rotherham keeper Adam Collin.

Tavernier then took it upon himself to get a winning goal for the hosts at the New York Stadium. His free kick flew into Fielding’s goal, leaving him little opportunity to do anything about the effort.

‘It was just crazy’ – Ian Evatt on Blackpool’s promotion celebrations