The wonderfully-named Ronaldo Viera made waves for Leeds United Elland Road after appearing as a 16-year-old for Leeds’ Under-21 side against an Isle of Man FC on May 2 2015, only signed a two-year scholarship deal on September 30 last year.

However, two days ago the exciting prospect signed his first professional contract at the club, a very quick turnaround since signing his two-year scholarship deal only 7 months or so ago. 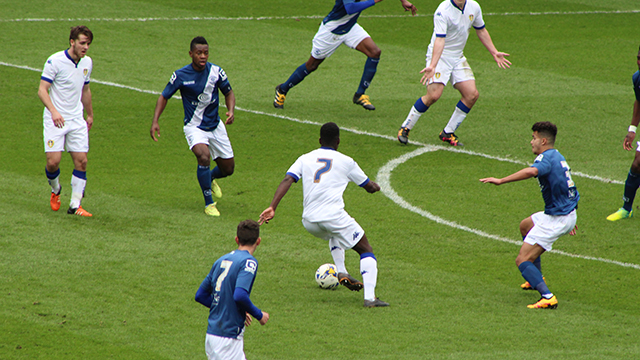 Above, is a picture of the exciting youngster in a Leeds United shirt, playing for the Under-21s against Birmingham U21s; Leeds fans could get to see him in the flesh today after he was named on the substitute bench for the final league match against Preston North End.

Viera’s on the bench, where he is joined by the returning Souleymane Doukara, with Liam Bridcutt and Jordan Botaka dropping from the starting line-up to make way for Toumani Diagouraga and Alex Mowatt.

However, despite whoever starts the game, the buzz amongst Leeds fans is over the inclusion of youngster Ronaldo Viera.

Ronaldo Viera on the bench for Leeds,there's a Football Manager generated player for ya #lufc

Viera is on the bench. That sounds good doesn't it! #lufc

Great news, give Ronaldo a half and see what he can do, massive away support to encourage him #LUFC

‘Speechless’ – Some Ipswich Town fans are unhappy with U23 inclusion

‘Speechless’ – Some Ipswich Town fans are unhappy with U23 inclusion

“We’ve got nothing to hide”- Southend United boss defends postponement