Every season, just after the campaign has begun, EA Sports are ‘in the game’ and release the current iteration of their highly-successful FIFA series.

Every release brings a whir of excitement as fans strip the shelves clean, get tucked into the ‘Auction House’ and get opening packs of cards hoping to uncover a mega-rare Ultra Leo Messi with diamond-encrusted sides…well something like that anyway.

Some fans of the game get busy arranging their Ultimate Team to what their club side currently has on its roster, arranging their very own version of their team on their console.

Here are the top 5 Leeds players on FIFA16 and just how their season has panned out this year.

Unless indicated, all stats are ‘typical per 90 minutes‘ (the typical output expected over a 90 minute game) and are derived from the WhoScored.com website profiles of the individual players.

First up is a 74-rated defensive midfielder with 68 pace and 73 dribbling skills from 3-Star Skill moves who is proving to be something of a lock in front of the central defenders. 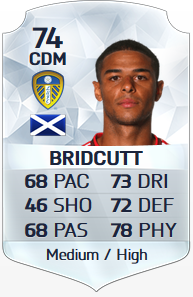 28-year-old Bridcutt was a former Chelsea youngster who first became a stand-out for Brighton before a £2.75m big-money move saw him end up at Premier League Sunderland.

Signing for Leeds United on a short-term loan at the end of November 2015, Liam Bridcutt put in the sort of displays that Leeds United fans had been looking for from their own players.

In the January transfer window, Leeds renewed Bridcutt’s loan into one that lasted until the end of the season.

This season Bridcutt put up the following per 90 numbers:

Next up is a 74-rated defensive unit with an 81 beast rating and 91 strength. 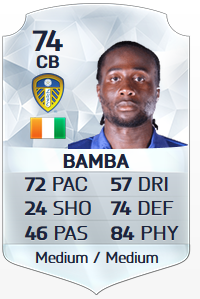 Sol Bamba’s first dalliance in Leeds United colours came in January 2015, when he signed on a half-season loan from Italian side Palermo in a move that helped galvanise a decidedly shakey Leeds United defence. That season, the 2014/15 campaign, Bamba was something of a revelation Leeds fans begged that he be signed full time by the club.

This season, the 2015/16 campaign, Bamba hasn’t exactly pulled up trees every game and has had some time served on the Leeds bench and out through injury/illness. However, he’s been strong when it matters and Leeds fans will be hoping that he’ll soon return to the pillar of strength he was when he first signed on loan from Palermo.

This season Bamba has put up the following per 90 numbers 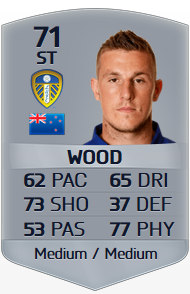 Chris Wood signed on at Elland Road via Leicester City in a transfer that saw the New Zealand forward exchange hands for a reported £3m. Missing some of the season with a hamstring strain, the big Kiwi still managed to finish with a respectable 12 goals at the rate of one per 232 minutes of game time.

Wood has been something of a handful for opposition defences with his strength and power in the air and his solidity when the ball is on the ground. Based on his first season, Leeds United fans are expecting great things from the Kiwi forward’s second season when the 2016/17 season kicks off in August.

Following on from the Kiwi is a 70-rated striker with 75 ball control and 72 finishing. 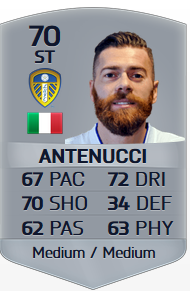 Bearded Italian Mirco Antenucci arrived at Elland Road from Italian side Ternana and was Leeds’ leading scorer in the 2014/15 Championship campaign with 10 goals. So far this season, Antenucci hasn’t hit those heights in what is likely his final season in Leeds United colours, his current contract running out at the end of the 2015/16 campaign.

Antenucci led the scoring at Elland Road last season wit h10 goals, being the only Leeds United player to break in to double figures that season.

He started out this season with a left-footed worldie against Burnley in what was a 1-1 draw at Elland Road. The fan-favourite has started 21 games this season, also appearing 18 times as a substitute, in what is likely to be a farewell to Leeds United fans.

Next up is a solid 70-rated right-back who has bled for the Leeds United cause. 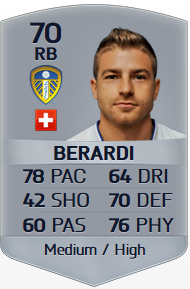 Former one-time, single-cap Swiss international Gaetano Berardi arrived at Elland Road from Italian side Sampdoria on July 18 2014, a team he made 26 Serie A appearances for. He also played in 27 Serie A games for Brescia.

Berardi’s time at Leeds has seen him sent off in his first game for the Whites for a two-footed, waist-high tackle, seen injury concerns and also two cuts to his head in separate games against Rotherham that have seen blood spilled.

Since Sam Byram’s departure for Premier League West Ham, Berardi has been one of Leeds’ most consistent players this season as he has nailed down the right-back spot, making it his own with a set of solid performances.

This season Berardi has put up the following per 90 numbers:

3 players Sunderland should be worried about losing this summer