After playing in midweek, the Championship teams have no time to rest with a full set of weekend fixtures following the close of the January transfer window. Leaders Leicester have pulled away from the pack and the chasing group will be looking to keep within touching distance of the league’s in form team. We preview four of the games in detail.

Another massive game at lunch time live on Sky this weekend with second against third. The meeting at Turf Moor was a scrappy affair with Burnley deservedly taking the points, but expect a very different game at Loftus Road.

QPR have made a great start to 2014 which has seen them return to the top two. Four wins from four in the league is exactly what Harry Redknapp would have wanted after a poor end to December. The return

of Charlie Austin from injury has coincided with the improved results for Rangers and Austin has three goals in his last two games. News broke this week however that Austin faces another lengthy spell on the sidelines with a shoulder injury. This is a massive blow for Rangers and could force Redknapp into an infamous deadline day move. Going into the game QPR sit three points clear of Burnley and would love to stretch that gap on Saturday.

Burnley are also unbeaten in the league in 2014, although they have lost their touch up front with back-to-back draws at home to Sheffield Wednesday and Brighton. January signing Ashley Barnes has struggled to make an impact for the Clarets thus far, but there solid defensive record is still standing tall. The star man Danny Ings has gone two games without a goal which has not happened much this season. The England Under 21 international scored the winner in the last meeting and will want to fire his team back into the top two with a win. He is this games key man.

The league leaders set a club record winning an 8th straight league game on Tuesday away at Birmingham and will be travelling down to the south coast looking to make it nine in a row.

Bournemouth have added a consistent level to their performances in the last couple of months. The Cherries have lost just two and won five of their last nine Championship games. The team that started the year

shipping goals left, right and centre has built an efficient defensive unit with the permanent signing of keeper Lee Camp earlier in the month seeming a vital part of this. A good victory last time out against Huddersfield gives Bournemouth confidence coming into this one with top scorer Lewis Grabben scoring three goals in his last four Championship games.

Leicester have been sweeping aside all in front of them building an eight point cushion at the top of the Championship table. With this being the case they are still the clear favourites to take the Championship title, at 4/7 with Sky bet to win the league. The team has goals all across the pitch. In Vardy, Nugent and Dyer the Foxes have netted over thirty goals and do not look like they will be letting up any time soon. Whilst the addition of Kevin Philips has added promotion experience to the squad. Expect Jamie Vardy and David Nugent to cause all sorts of problems for the Bournemouth back line and the former is this games key man.

When these two met back in October it was a battle between the leagues bottom two. Both looked certain for the drop. A lot has changed since with both clubs changing their managers with varying levels of success.

After another game unbeaten away at Burnley on Saturday, Stuart Gray was finally given the top job full time and responded with a hard fought draw at Millwall on Tuesday. The Owls lost the talented Connor Wickham as he was recalled by Sunderland 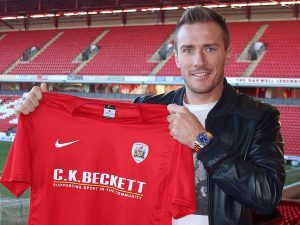 on Monday. They have acted swiftly acquiring the services of another young talented English forward in Benik Afobe from Arsenal until the end of the season. Wednesday have not lost a game since Christmas and have created a mini-gap between themselves and the relegation zone.

The appointment of Danny Wilson at Barnsley, 15 years after he left the club, has not had the instant impact like Gray has had at Wednesday, with the Tykes winning just once in his six games in charge. They have had some signs of improvement however in the past week or so. They are unbeaten in three and remain only five points away from safety so can remain hopeful of survival. They do need a result on Saturday against relegation rivals with games running out fast. The Tykes have added to their squad in the last few days with the signing of Jack Hunt from Crystal Palace on a three-month loan deal and goalkeeper cover in free agent Iain Turner. January signing Liam Lawrence made his debut on Tuesday coming off of the bench and the experienced midfielder is this games key man.

Another week and another Yorkshire derby at Elland Road as the pressure continues to build on the Leeds United players. Meanwhile, Huddersfield have been indifferent of late with some fantastic play mixed with some shocking errors. Both these sides could still make the play offs if they can put some results together.

When it rains it pours at Elland Road. The continual empty statements from the Leeds board over the takeover is frustrating for fans. Combine this with the seven game win-less run in the league and you can understand the gripe coming from the Leeds faithful. The over reliance on the recently instated captain Ross McCormack to get the goals has been United’s shortfall and he will be the k

ey man in this game. They have netted just four goals in their win-less run. Almost two months have passed since fans have seen Leeds win at home and overcoming Mark Robins’ Huddersfield side is going to be a tough test.

Huddersfield fans can also feel frustrated but for rather different reasons. On numerous occasions this season they have seen their side play teams off the park, but far too often they have seen games just drift away. Two battling away performances at QPR and Bournemouth in their last two league games both saw them come away with nothing to show for their efforts. Town have a wealth of attacking options, it is just a case of finding a strike pair that can light it up together, or effectively employing one man in a lone role. Huddersfield’s longest unbeaten run came back in September, stretching five games. If they could better that run they have every chance of making the play offs and that could definitely start on Saturday at out of form Leeds despite not winning away since the start of December.

Other fixture with predictions