Love was in the air this weekend and we were gifted plenty of lovely moments in the Football League.

Beautiful goals, plenty of lover’s tiffs and a really breathtaking display from Middlesbrough fans last night with their display for former BBC commentator Ali Brownlee, may he rest in peace.

Here are your awards winners for Valentine’s weekend:

FANS OF THE WEEKEND: Sheffield United

The Blades came out in force for the Yorkshire derby against Doncaster Rovers this weekend, as over 4,000 Sheffield United fans packed themselves into the Keepmoat Stadium.

Their faith in following their tea was rewarded as Nigel Adkin’s men ran out 1-0 winners, although the scoreline could have been heavier if the away side took more of their chances.

It’s another good win that keeps them just about in touch with the playoff race and with plenty of the season to go, they could make yet another late charge. Regardless of where they come, the red side of Sheffield will always have a solid following.

A goal of the season contender here for sure as Ricky Holmes capped off a pretty excellent season so far with this stunning strike against Leyton Orient.

The winger runs on to a loose headed clearance, keeps the ball in the air with his first touch before quickly rifling it beyond the Orient goalkeeper to give his side a two-goal cushion. It’s a real sight to behold, find it on YouTube and thank me later.

It helped Northampton notch up another impressive win in a quality season that still sees them as front-runners for promotion. More performances like that and Chris Wilder’s side will be playing League One football next season.

This moment was pretty bizzare for a number of reasons and in all honesty, it doesn’t reflect well on anyone involved.

With the defender already on a yellow card and his side already down to ten men, the Rotherham man delays taking a throw-in late on to the point where the referee, maybe a little hastily books him. However, the Birmingham players remind him that it’s the second time he’s had to tick off Mattock and he’s then shown a red.

Would the ref still have given it had he remembered that Mattock had been booked previously? But as he had, there was only one option left, and that was to make it a bit of a farce.

There was certainly no love lost in this feisty League Two affair that had five goals and three red cards to boot.

Gwion Edwards put the visitors ahead in the first half and that’s how it remained at the break before Billy Kee levelled for Stanley just after half-time before things flared up in spectacular fashion. Shay McCartan went in for a poor challenge that led to a huge melee that saw him, Crawley’s Simon Walton and Accrington’s sub goalkeeper Jason Mooney all receive their marching orders.

The home side took advantage of the 10v10, with Matt Crooks, Seamus Conneely and Piero Mingoia putting the result beyond doubt. This was certainly a case of the storm before the calm, with hopefully some of them settling down for a nice romantic Sunday after a tempestuous Saturday.

It’s becoming more and more difficult to describe Adam Armstrong’s season for the Sky Blues, as he puts in another strong performance at the weekend.

Two more goals to add to the account as Coventry trounced Bury 6-0 at home. That’s now 19 for the Newcastle loanee, who has shined so brightly this season and looks destined to have a future in a higher division than he currently plies his trade in.

It was pretty tempting to put Coventry as Team of the Week, they had that many great performers in this one, especially John Fleck who was also terrific. Are they hitting form just at the right time? We shall see.

Two lovely headed goals from Aden Flint gives him the award this week as he helped Bristol City earn a 2-1 win over playoff-chasing Ipswich Town.

Both were glancing headers to the far post that were so difficult to stop, even if they had someone on that post. It helped Lee Johnson maintain his solid start as the head coach, with his side yet to lose at home in three outings under his tutelage.

This was the kind of performance we saw regularly from Flint in League One and it’s good to see him being a real threat from corners again. If he can continue to do that and be steady in the Robin’s back line, they should have enough to stay up.

TEAM OF THE WEEKEND: Sheffield Wednesday

Their cause was helped by Yoann Barbet’s early red card but the Owls took full advantage of the extra man. Fernando Forestieri, Gary Hooper, Kieran Lee and Lucas Joao all got on the scoresheet as they begin to strengthen their playoff push.

This team has come a little from nowhere after a few seasons of stagnation but Hillsborough now hosts some of the best football in the Championship. They are scoring for fun and keep it on the down low, but they could even make a late push for the promotion places. 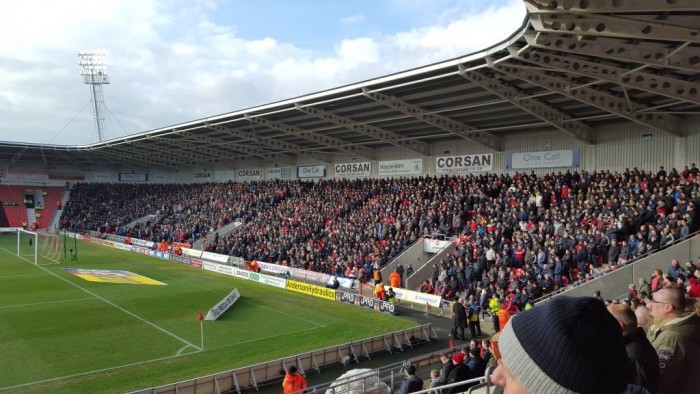