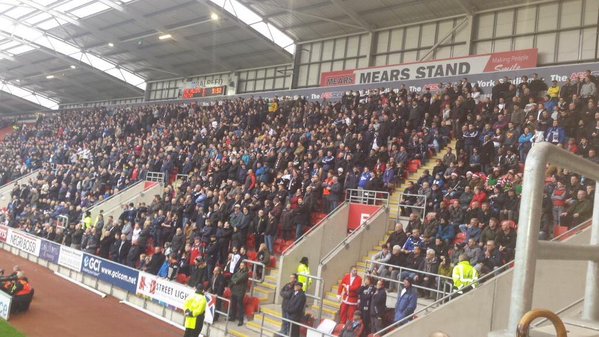 Tis the season to be jolly, so we are giving you a late Chrismas present by combining Saturday’s and Monday’s games into one big awards. These are now awarded for performances over both games, so these are extra special for the winners, who have really impressed over a short space of time.

FANS OF THE WEEKEND: Every single fan

This will definitely come across as cheesy but at this time of year, we are feeling pretty charitable so we applaud anyone who made the trip to a game either on Boxing Day on Saturday or the Boxing Day holiday on Monday.

There were plenty of fairly distant travels, a few local derbies but plenty of festive cheer as football at this time of year brings out the best in us.

Our thoughts also go to those around the country who have been affected by the recent flooding. From Cumbria to Yorkshire to wherever there has been issues, we send you all the best and hope that you can return to some sense of normality sooner rather than later.

This was a real Christmas Pudding drizzled in rum and fire goal, it was flashy but it really had a punch to it.

After an excellent ball to the Spaniard, the Liverpool loanee took some beautiful touches over the Reading defence before drilling the ball home on the half-volley.  In a game full of wonderful goals and a Christmas period full of them, this was the pick of the bunch.

Shoutout to a few unbelievable almost-goals in a few games that would have taken the biscuit of the whole year but so close, yet so far.

This was a terrific showing by York City football club, who remembered to help those less fortunate at Christmas.

After the club were forced to postpone their Boxing Day fixture against Northampton Town and not a club to let something good go to waste, they donated any food that could not be reused to the Harrogate Homeless Project.

A wonderful gesture by the club that should be applauded and copied. It’s an example of how giving at this time of year can be so heart-warming and kudos to a team that isn’t rolling in riches in sharing with those that may have gone hungry.

Yet again, we were treated to a number of entertaining affairs but none quite as packed as Leyton Orient’s win at home to Portsmouth on Boxing Day.

The away side went ahead early doors through Gareth Evans but they then went down to 10 men as Adam Webster saw red for a tug on Jobi McAnuff in the box. Jay Simpson slotted home the resulting penalty to continue his hot streak before before Ollie Palmer gave Orient the lead going into the break.

Mathieu Baudry was then dismissed for a reaction after being fouled but from the resulting free-kick, Palmer extended the host’s advantage with his second. Evans scored a second for a tense finale as Orient held on, despite the club’s president kicking assistant manager Andy Hessenthaler. Insane, fiery game, just what we wanted after Christmas.

After finally recovering from injury, James Maddison has come back into the Coventry City side and has really added a little bit extra to the squad.

The 19-year-old has scored two goals in two games, late on in both occasions, and he alone helped his team grab four extra points this Christmas. He’s been impressive and has helped rejuvenate the Sky Blues as they have began to wane a little in the last few weeks.

Tony Mowbray is keen to keep the interest off of the local lad, who has attracted Premier League interest already, as he knows he could be a real key player this season now he is fit. Him, along with a number of interesting young players, could help Coventry get back to the Championship this season.

Despite a relatively average 2015, Nahki Wells has recovered well in the final two games of the year to help Huddersfield Town gain some crucial points.

A double in their win against Preston on Saturday and an equaliser against QPR on Monday have helped his side begin their ascent away from the relegation zone. He took all of his goals very well, especially his free-kick at Loftus Road, and he looks back in classic form.

Two good games won’t be enough for the Terriers but it’s a sign that they are getting him back to the level he can play at. Hopefully for Wells, 2016 will be a much better year for a usually prolific forward.

TEAM OF THE WEEKEND: Wycombe Wanderers

Two games, two 2-0 wins, nice and easy for Gareth Ainsworth’s men who head back into the playoffs with back-to-back wins over the Boxing Day period.

Four different scorers notched goals and highly-rated goalkeeper Matt Ingram kept two solid clean sheets that have brought them right into the thick of the playoff hunt and much closer to the promotion they missed out on in dramatic fashion last season.

Getting quick wins at this time of year can give a team real momentum heading into 2016 and beyond, a few more positive results over the next few weeks will make Wycombe a team no-one wants to face down the stretch.