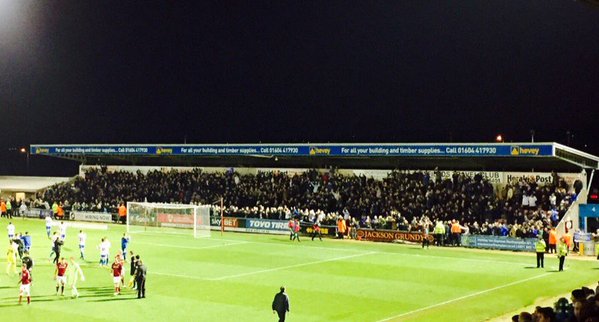 It’s beginning to look a lot like Christmas and the Football League is handing us little gifts everywhere we go. We’ve had so much football this week that it’s rocked our socks off as the festive football season gets underway. So with the final awards before Christmas Day, here’s this weekend’s award winners:

FANS OF THE WEEKEND: Portsmouth

Everyone likes to do a little more at this time of year and my word, Portsmouth fans took the biscuit this weekend.

Pompey managed to take 1,000 or so fans on an almost five-hour round trip to Northampton Town and Paul Cook’s side oblidged their terrific support by beating the in-form Cobblers 2-1. It was a great display, capped off thanks to substitute Conor Chaplin late on.

Kudos to those south coast fans but hats off to lots of full looking stadiums this weekend as we all get amped up for the next away game that comes on the best footballing day of the year.

Some of you might have missed this goal as it came on Sunday’s slot of games but my word, search this one up now and feast your eyeballs on this wonder stroke by Danny Williams.

In Brian McDermott’s first game back in charge of the Royals, it took this fantastic goal from the American to get him off to a winning start. As Reading play Williams through, he hits a cross-shot on a bouncing ball from just to the right of the box and it flies into the top corner.

A truly special goal that Reading fans will certainly hope will kick-start their season again after a big lull over November. More goals like this and they will be racking up the points again in a very tight Championship yet again.

Our Christmas hats go off to the chairman and the board of directors at Bury FC this weekend for their great festive jesture.

Fans were given vouchers for a free pie and a drink as a thank you for their on-going support this season. No one can rightfully turn down an offer like that and I for one would have adored have a nice hot pie as well as a matchday ticket.

Fantastic stuff from chairman Stewart Day and the boys at the Shakers, giving back to the fans, especially at this time of year, should be celebrated.

What a humdinger to reintroduce Nigel Clough to Burton Albion. His side went behind early against Doncaster Rovers but rallied to equalise soon after through Calum Butcher.

Donny could have gone back in front after half-time when they were awarded a penalty but Jon McLaughlin was equal to Andy William’s penalty and Butcher added to their misery by giving the Brewers the lead.

Paul Keegan’s free-kick and a late Nathan Tyson penalty looked to have given Darren Ferguson’s side the win but Mark Duffy equalised late on before Thorsten Stuckmann denied the home side a last second winner. A cracking game but certainly not what Clough junior will want to have to endure every week.

Bolton are in a bit of a mire recently and hopefully the tax man can give them a nice Christmas salvo soon but at least there was a ray of sunshine on Saturday in the form of 20-year-old striker Zach Clough.

The Trotters academy graduate showed his talents yet again this weekend as he tried his best to give Neil Lennon’s side a valuable win. Two goals in quick succession looked to have done the trick, had Ross McCormack equalised in the final few minutes.

Had it not been for injuries, we would have likely seen more of Clough this season but regardless, it’s good to see him back in the fold.

On loan from Reading, Dominic Samuel was terrific for Gillingham in their much needed victory against Millwall at the weekend.

Two quality goals, his first a header and his second a neat finish after pouncing on a defensive mistake. He was a real catalyst for a Gillingham side that needed a reaction from recent defeats to teams around them.

It’s always good to see a loan signing do well, especially when his parent club is another Football League side and hopefully Samuel can continue to help the Gills strive for promotion this season.

TEAM OF THE WEEKEND: Middlesbrough

All good things come to an end and for Brighton, their unbeaten run was stopped emphatically by a terrific Middlesbrough side.

They were irresistible from the start, scored an excellent team goal for their first and looked dangerous every time they came forward. Two more instinctive goals helped them stay to at Christmas and show just how good of a team they are.

With Jose Mourinho looking on, Boro showed exactly why they should be considered promotion favourites this season, it was a real statement of intent g from Aitor Karanka’s men.