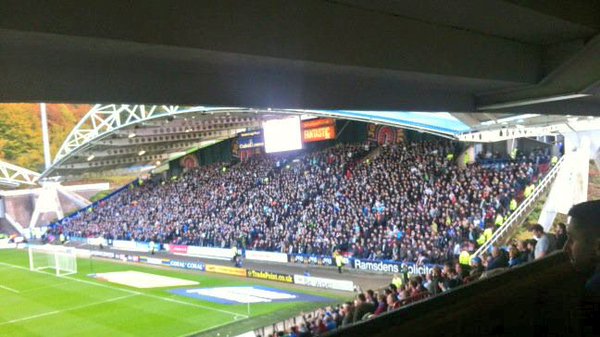 We are just about a quarter of the way through the season, which already feels strange to say. It’s been pretty fast and hectic and these award pieces seem to come around quicker and quicker so I will not delay any longer, here’s this weekend’s winners.

FANS OF THE WEEKEND: Derby County

Yet again this year, Derby County have come out in their droves on the road and their side is paying them off with just as much gusto.

Roughly 3,800 of them took the trip to Huddersfield Town and their team duly delivered with a 2-1 victory, their sixth win in their last eight games. Chris Martin is on fire, the team is really clicking and George Thorne can also take a bow with one of the goals of the weekend.

If they keep this up, it’s likely they’ll be fighting for promotion and their fans, along with Leeds United who have been impressive, seem willing to follow them everywhere they go.

There were some classy goals this weekend but there was not much better than Billy Bodin’s lovely volley against Newport County.

With his team 1-0 behind, the ball is nodded into the forward’s path and he hits the ball sweetly first-time as it lofts over the hapless Newport goalkeeper and into the back of the net.

It comes with a tinge of disappointment, it was the only bright spot in what was a very good performance from the Welsh club, but you cannot deny how good this goal is.

MOMENT OF THE WEEKEND: Fans falling over barriers at Sheffield Wednesday

Embarrassing yourself on national TV is something us football fans take a little pride in so those Sheffield Wednesday fans on Friday night, do not hide your faces in shame.

After their team’s 2-1 win against local rivals Rotherham United, midfielder Barry Bannan threw his shirt into the away fans, only for several of them to fall over the barriers in an attempt to catch the Scot’s match jersey.

Pretty hysterical stuff as fans clamour for a player’s shirt but they all took it with a smile on their faces. As they should, Bannan didn’t even get himself on the scoresheet in this one.

What a cracking game between one side that are seemingly unbeaten away from home against another that are willing to go toe-to-toe with anyone.

Walsall got themselves in a two-goal lead through Romain Sawyers and Milan Lalkovic heading into the break and it looked like another simple afternoon for the promotion chasers. However, they were pegged back in three second-half minutes as George Moncur and Marvin Sordell brought the hosts level.

IN OTHER NEWS:  Doncaster Rovers enquired about Mallik Wilks' availability before his Hull City move

George Evans’ second goal for the Saddlers gave them the lead again before a long-range effort from Owen Garvan and a Dean Ambrose goal put The U’s ahead for the first time. However, James O’Connor popped up late to earn Dean Smith’s side a point, a real topsy-turvy affair.

The 19-year-old Frenchman has been impressing all season but Moussa Dembele was the real bright spark that helped his side come from behind a good Reading team.

A few neat touches, excellent one-twos and some genuine pace, Dembele scored twice as Fulham came back from 2-0 down to win 4-2 in an excellent early affair in the Championship.

It was a really quality display from the youngster that will no doubt be attracting interest in January and next summer but the London club will hope they can keep him for as long as possible to help establish the playoff run that owner Shahid Khan hopes for.

The little Irishman has always been a talented footballer and he’s seriously impressing again this season as a real livewire for Brentford.

Two assists and a goal of his own in a 3-0 win against Charlton is exactly what you want from your main creative source, who’s swing of a boot seems to create magic whether it’s a cross, a pass or a shot on goal.

In this kind of form, it’s no surprise that he’s getting potential Premier League buzz but the Bees will be more than happy that he’ll be staying put until at least January, fans will be hopeful he can start pushing them back to where they finished last season.

TEAM OF THE WEEKEND: Peterborough United

Another quality result for the Posh that would have really put a smile on fans’ faces after they won 4-0 against Doncaster Rovers, managed by their former boss Darren Ferguson.

Gabriel Zakuani, Erhun Oztumer, Callum Elder and Connor Washington got themselves on the scoresheet as Peterborough brushed pass a poor Doncaster Rovers as they begin their march towards the playoff places.

Graham Westley has not been afraid to play the attacking football that fans craved, with the team now top scorers in League One and they are starting to look like the team challenging at the right end of the table that many thought they would be at the start of the season.