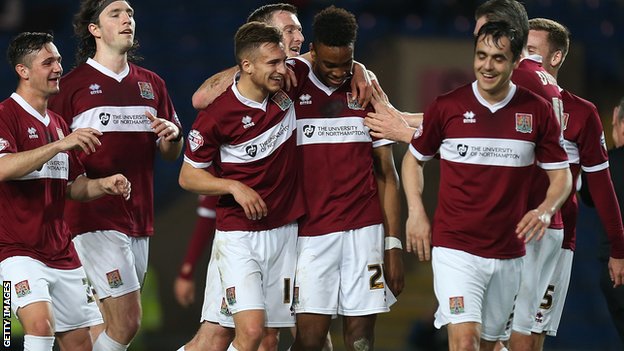 5 players to look out for next season at Northampton Town

The 2014/2015 season brought a period of consolidation for Northampton Town, one which was fairly welcome after the turmoil of a relegation battle the season before. This season however the stakes are higher and manager Chris Wilder will be hoping his team can launch a genuine assault on the upper echelons of League 2 and win promotion after eight seasons in the Football League’s basement division. Wilder has made efforts to rejuvenate his squad ahead of the upcoming season, bringing in six new players to replace the nine he released, and the squad appears to be stronger than last season with more competition for places in key positions. Here are five players to look out for as the new season draws near.

One of the Cobblers most exciting signings of the summer, Adams joined the League 2 club from recently promoted Bury in late May. The midfielder has Championship experience with Rotherham United and enjoyed a good season with the Shakers last time around making 44 appearances and chipping in with a solitary goal, which came against Cambridge United. The 28-year-old has a wealth of experience to his name, having made over 300 league appearances, and has scored 38 career goals. Adams will add intelligence and consistency to the attacking midfield area which was missing at times for the Cobblers last season, and should be able to compliment the talents of his fellow attacking players.

Northampton are currently blessed with many exciting options in the attacking midfield role, but none with as much potential as the 22-year-old Lawson D’Ath. A relatively unknown quantity this time last year, D’Ath burst onto the scene with two goals in the Capital One Cup first round in the 3-2 away victory of Wolves and went onto establish himself as a first-team regular scoring a further seven goals over the course of the season, including four in January. Fatigue caused D’Ath’s form to dip as the season progressed, but with a first full season under his belt, D’Ath will be looking to continue his development in a team which will be aiming high this time around.

Surely the poorest decision of Andy Awford’s tenure at Portsmouth was to let the excellent Ricky Holmes leave for pastures new in January; the winger excelled upon joining the Cobblers and led what was a remarkable upturn in form in the New Year. He scored five goals, including the winner in games against Dagenham and his former team Portsmouth, and his importance to the cause was underlined when injury meant that the team’s form slumped dramatically in the final month of the season. If the 28-year-old can stay fit all year then Northampton’s promotion bid can only be strengthened – he is, put simply, one of the best players to grace the Sixfields turf in many years.

A thorn in the Cobblers side for many years as an Oxford United player, Alfie Potter’s move to Sixfields was greeted with a great deal of excitement when he became the first signing of the summer. Potter made around 200 appearance for Oxford after joining the club permanently in 2010, scoring 20 league goals, and his display in Oxford’s 3-1 win at Northampton last season was one of the best individual performances that Sixfields has seen for years. After an unsuccessful short-term spell at AFC Wimbledon, Potter will be hoping that joining Northampton will allow him to regain the form which has made him into one of League 2’s most sought after players over the last few years.

By far the most exciting young talent currently at Northampton Town, striker Ivan Toney is already a target for clubs much higher up the Football League pyramid, such as Wolves and Newcastle: this after just one full season as a professional is quite some going. Toney burst onto the scene at the end of the 2013/2014 season helping the Cobblers secure their Football League status with three goals in the last two games of the season. The 19-year-old scored an impressive ten goals last season and will be looking to build on this during the upcoming campaign. If Toney can add more consistency to his game, and curb his occasional recklessness which tends to land him in hot water with referees, the youngster should be able to establish himself as a force to be reckoned with in League 2 next season.