Burnley welcome Luton Town to Turf Moor this Saturday in their second Championship outing of the season.

Vincent Kompany’s Clarets come into this one on the back of an impressive result and performance against last year’s play-off finalists Huddersfield Town.

Burnley looked comfortable in this game as they dismissed the Terriers 1-0, with the only goal of the game came courtesy of Ian Maatsen as Kompany’s side started in the best way possible.

Luton Town were the fairytale story of last season reaching the play-offs against all odds. Nathan Jones’ side will be hopeful of doing the same again, but they’ll be under no illusion of how tough the competition is this year. Their opening fixture against Birmingham City ended in a 0-0 draw and whilst this result isn’t dreadful, the Hatters were strong favourites.

The game this weekend will be close and neither team will be a pushover, but Luton Town will need to be on top of their game if they want to match a Burnley side who look injected with energy.

Burnley have a couple of injuries to note, but none of which should derail their preparations.

How will Burnley line up?

There’s no need for Kompany to change the system and therefore he should stick with the 4-3-3 he used last week.

Jay Rodriguez missed last week’s Huddersfield Town clash, but there’s no current indication of whether he’ll be ready for Saturday afternoon making it hard to predict if he’ll feature.

‘Should have the firepower’ – Burnley v Luton Town prediction: The72

Burnley may be on the verge of losing Maxwel Cornet but they’re definitely not lacking in attacking firepower. This weekend it’s possible youngster Dara Costelloe drops to the bench to make way for Scott Twine who could make his first start in front of the home support.

Kompany is clearly passing on his experience as the Burnley defence looked solid and confident last time out, it’s unlikely Kompany will risk shaking things up in this area so expect it to remain the same. 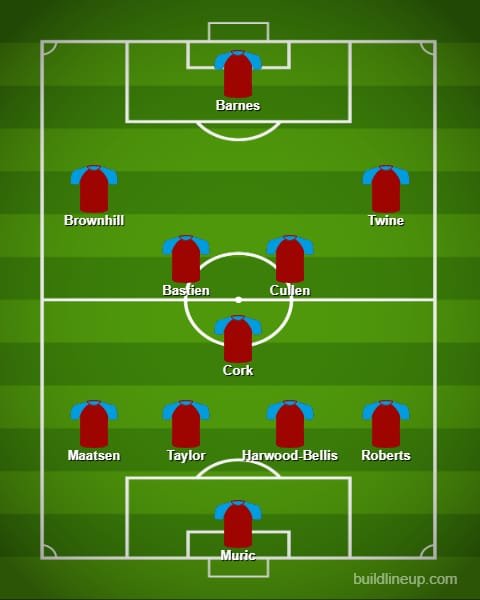 Middlesbrough host Sheffield United at the Riverside in the Championship this weekend. Middlesbrough are yet to win a…
Total
1
Share
1
0
0
0