Sunderland take on Bristol City this weekend in their second Championship outing of the season.

The Black Cats began the season with a tough 1-1 draw against Coventry City, whilst their opponents this weekend were defeated 2-1 by Hull City.

Both sides are capable of playing some good stuff and this should be a good match-up. Alex Neil and Nigel Pearson will be hoping to get their first three points on the board of the season and both managers will see this game as a good chance to do just that.

Bristol City have the home backing and this should help them, but Sunderland are expected to bring a strong following making the game one to watch this weekend.

How will Sunderland line up?

Neil is known for his ability to adapt and change a line-up to exploit weaknesses in the opposition.

Last Sunday, Sunderland played some progressive stuff, but at times the Sky Blues looked slightly more comfortable and they were majorly in control of the tempo. Neil may want to change that this weekend and set the pace from the off, but his system last week did work so he may opt for the same interchangeable 4-2-3-1 formation again.

The Wearsiders’ most recent signing Ellis Simms is yet to make his debut, but after another good Ross Stewart performance last week Simms may have to take his chance off the bench.

New signing Daniel Ballard impressed fans at the back, however question marks were raised over some players’ ability to make the step-up to the Championship.

The game last Sunday seemed to go by Elliot Embleton and the versatile midfielder’s contributions were limited, so there’s a chance Neil opts to start Patrick Roberts in hope that he causes Bristol City’s defence some problems early on.

There were doubts over Lynden Gooch’s ability to play right-back, but after an assist and a solid display last time out, there’s no need for this to change.

Here’s our predicted Sunderland XI for this Saturday’s clash against Bristol City: 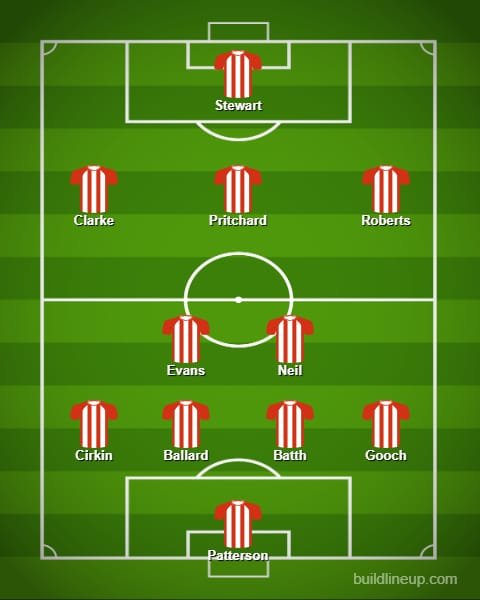