Sunderland host Coventry City this Sunday in their opening game of the 2022/23 season.

The Scot has Championship experience and his attitude and demeanour is exactly what Sunderland fans have been crying out for, for so long. A bumper crowd of over 35,000 is expected making this a game to keep an eye on

But an opening affair against the Sky Blues will not be easy. Mark Robins’ side finished mid-table last time out but looked like top six candidates at times. So far, Coventry City have recruited well and managed to retain key players making them an exciting outlet this year.

The Sky Blues have second-tier experience over what is quite an inexperienced Sunderland squad and this could be a deciding factor.

How will Sunderland line up?

Neil is experimental with his formations and systems and he doesn’t hesitate to change and adapt. However, it appears that throughout pre-season he’s opted for a 4-2-3-1 formation.

Sunderland have recruited well bringing in youth and quality, but it remains to be soon how many of the new arrivals will start on Sunday.

Jack Clarke and Patrick Roberts were key parts of Neil’s preferred system last season so they could be in with a chance, with Daniel Ballard at centre-back impressing supporters already.

The fight for right-back is interesting with Trai Hume impressing in pre-season, but that would mean no place for Lynden Gooch who seems to be improving and well-liked under Neil, so this is certainly one to keep an eye on.

Aji Alese probably hasn’t featured enough in the friendlies to warrant a start with new goalkeeper Alex Bass expected to start as a second option.

Ellis Simms has sealed his loan move to the Stadium of Light now as well, so he could make the matchday squad for Sunday’s game.

LINK: ALL THE LATEST SUNDERLAND NEWS ON THE72

Here’s our predicted Sunderland XI for the game v Coventry City, which will be shown on Sky Sports on Sunday… 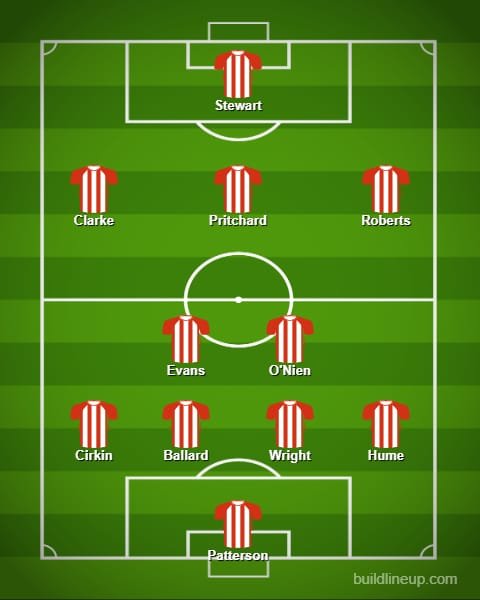 Blackburn Rovers man out injured until next month, manager confirms

Blackburn Rovers will be without Scott Wharton until next month, manager Jon Dahl Tomasson has told the club’s…

Stoke City midfielder Peter Etebo is on the radar of La Liga duo Getafe and Real Valladolid, a…