‘Leeds United would take more’ – it’s become a social media meme. Trouble is, it’s true! they top the away averages this season and, regarding Elland Road, have not had a crowd below 34,000 this season. Championship football is just readying to restart after lockdown and there are rumblings across social media of fans gathering in the vicinity of Elland Road in a form of solidarity on match days. Now the Leeds United Supporters’ Trust (LUST) has issued the following video.

Twitter: It’s important that we all #StayAway from Elland Road as we go into these vital remaining games. #RespectOurNorman… https://t.co/D715Pf1eF4 (@lufctrust)

There is an obvious sense in Leeds United fans that the vital terrace element would be missing when football returns to Elland Road with the visit of playoff leaders Fulham. Some fans are wanting to congregate, so it seems, in order to cheer their side on from the curtilages of Elland Road. 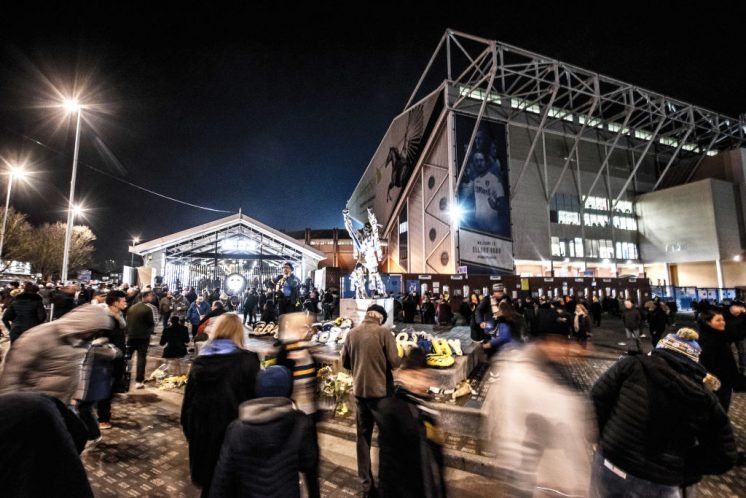 Providing a fan presence has already been seen on the continent with Porto fans scaling the stadium to sit on the roof with flares to watch their 1-0 win over Maritimo recently. There’s even a famous photograph of Leeds United fans sitting on the Peacock roof opposite Elland Road to watch a match back-in-the-day.

Fans are not likely to be wanting to go to such lengths as this. No, there is a yearning to be there to create an atmosphere but not for climbing stadiums or pub roofs. Still, it is something that is being openly discussed on social media by some fans.

Twitter: As much as we want you there with us every step of the way, please stay away. We appreciate that you will! Thank yo… https://t.co/PFV2tNanKC (@LiamCooper__)

LUST’s post has garnered much response and generated much debate. It has led Leeds United captain Liam Cooper (above) to retweet the video and adds his own, personal message for Leeds United fans to stay clear of Elland Road on matchdays.

The message is simple – stay away.

Coventry City in "negotiations" with goalkeeper