It is no secret that striker Mbaye Diagne has been a target for a few clubs in the past couple weeks, none more so than Nottingham Forest, as reported by the72. He has given Forest fans hope that he is on his way to the City Ground. However, Diagne told the Guardian that he didn’t realise what he had posted on his official Instagram.

The powerful centre forward, who has been playing out on loan for Club Brugge this season, would be a great acquisition for any club in the Championship and most clubs in the Premier League. It is understood Forest have shown the most interest in the 28 year-old who has now returned to his parent club Galatasaray.

Diagne posted this image on his official Instagram, along with the message,  “destiny, truth and a lion never dying.” 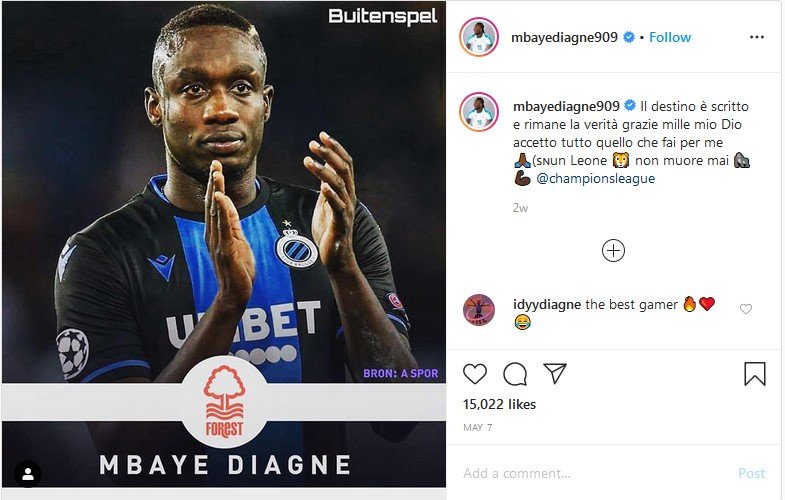 This post got Forest very excited about signing the Senegalese striker who scored 31 goals in 2018/19 season in the Turkish Super Lig.

“I posted it but I didn’t realise what was on it, and it certainly wasn’t anything official,” he says. “But once it was done, it was done. It wasn’t intentional.”

This seems a very careless post by Diagne and it would be hard to believe that Diagne was unaware the badge was Forests, a club he has been linked with heavily over the past month.  He did not know if there had been any contact between Forest and Galatasary regarding a possible move.

“Not with me,” he says. “Any negotiations would have to go through Galatasaray and I don’t know if anyone has been in touch with them.”

As mentioned previously on The72, this would be a real coup for Forest, especially if they are unable to get promoted this season. Diagne is confident he would succeed in English football.

“I can hold up the ball and lay it off, I’m good in the air and I’m a finisher. All I know is that, whether at Galatasaray or somewhere else, I am eager to get back playing and scoring again.”

The next couple of months will certainly set to be interest. Forest fans will be hoping Covid-19 has impacted their finances too much, and that they can bring Mbaye Diagne to The City Ground next season.

Charlton disarray could be solved after Bassini makes confession