In all honesty, it was the biggest of surprises when it was announced that Pontus Jansson was to be leaving Leeds United to join Brentford on a £5.5million deal.

Jansson had, of course, been absent from the pre-season preparations and it didn’t take long for many to comment on this occurrence. The gist of these comments was that Jansson was either being given extended leave after international commitments or that there were other motives at play.

It proved to be the latter of these, of course. Notions started circulating that a sale had been actioned due to him being a negative influence on the club and, in turn, the dressing room ethos that Marcelo Bielsa prides himself on.

So, with all that as a backdrop, a hastily arranged, £5.5million sale was sanctioned by the club and Jansson moved on in his career. The trouble is, his committed displays had endeared him to the hearts and minds of many fans since his arrival on an initial loan deal from Serie A side Torino.

This was, of course, converted into a permanent deal, the affable Swede going on to make 120 appearances for Leeds United, scoring nine goals and providing three assists. This helped to create a solid link between the player and the terraces, many who saw his displays as meaning that ‘he is Leeds and he knows he is’. 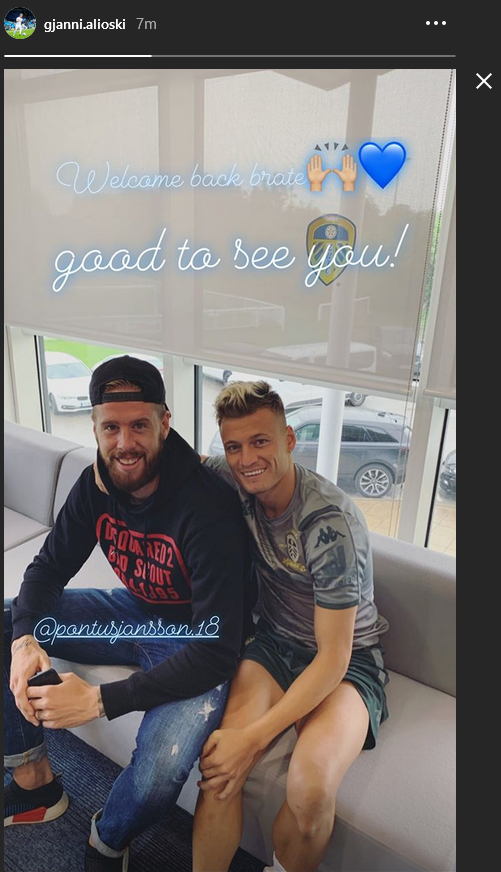 Jansson’s appearance at Thorp Arch is most definitely to say his last goodbyes to his former teammates and to pick up any outstanding belongings etc before the season starts at the weekend.

What has been picked up on, by some fans, is that the popular Swede looks far happier in this image taken from Gjanni Alioski’s Instagram story than he has done in other snaps and pictures taken of him since his move to Griffin Park.