As ever, it seems that Peterborough United are set for a busy transfer window, with manager Steve Evans determined to bolster his squad heading into the second half of the season.

His side’s inconsistency in recent months has seen The Posh fall behind in the fight for automatic promotion and into the dogfight for one of four League One Play-Off spots. However, it can’t be seen as all doom and gloom at London Road.

Steve Evans is showing his determination to take The Posh back to the Championship, and Chairman and co-owner Darragh MacAnthony – along with fellow co-owners Jason Neale and Stewart Thompson – are backing him all the way.

Evans has made no secret that he is keen to shuffle the pack in the January transfer window, with departures expected and replacements inevitable. Recently, it was reported that former fan favourite Lee Tomlin was set to return to Peterborough on loan from Cardiff.

The first departure was announced earlier today, as midfielder Jamie Walker returned to Wigan Athletic after an unsuccessful loan spell at London Road.

However, an agreement has been delayed with things on Cardiff City’s end seemingly holding up the deal. Director of Football Barry Fry spoke to the Peterborough Telegraph to discuss the Tomlin deal and provided a surprise update on three possible deals.

“Lee only wants to play for Posh. He wants to enjoy his football again. It’s not about money which is true as we won’t be paying anywhere near what he is getting at Cardiff,” Fry said.

“I am waiting for a call from Cardiff to get this deal done and I hope it happens for our sake and for Lee’s sake. He would be broken-hearted if it didn’t happen.

Fry went on to add that three players could be through the doors at London Road before Saturday’s FA Cup clash with Championship side Middlesbrough.

“What a player he (Tomlin) would be for us if he’s anywhere near his best, but we are also trying to get other players in, preferably ones who aren’t cup-tied. There could be three here by the weekend and all would be ready to play at Middlesbrough if required.”

It has been reported that The Posh are also keen to sign Bradford City loan star Jack Payne and Oldham Athletic defender George Edmundson.

Two defeats a blessing in disguise at Leeds United as transfer window opens? 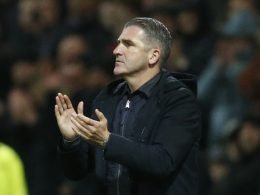