The list of Italian teams supposedly courting Leeds United’s former Italian striker Mirco Antenucci continues to grow with yet antoer side being added to the mix according to media site TUTTOmercatoWEB (TMW).

The team in question is the little-known Società Polisportiva Ars et Labor (SPAL) who are based in Ferrara in the Emilia-Romagna region of Italy. Currently set to play in Serie B next season, having secured promotion from the Lega Pro division, SPAL are said to be looking for a striker to lead their line and see Antenucci as the perfect fit for the side.

Antenucci was one of the first wave of foreign players brought in by Leeds United on Massimo Cellino’s takeover of the club two seasons ago. Brought in from Serie B side Ternana, the 31-year-old Termoli-born striker made 80 appearances for the Whites over both seasons and scored 19 goals with 8 assists.

TMW say that, in addition to sides like Ascoli and Parma, that, “the name of Mirco Antenucci is holding court” and that their sources say that another team is positioning themselves as a suitor for Antencci, this being the newly-promoted SPAL.

According to TMW, for the return to Serie B, SPAL coach Leaonardo Semplici “wants a striker of great experience” and that he sees in Antenucci that player.

Playing in the cut-and-thrust atmosphere of the Championship would be that experience which Semplici would be looking out for and Antenucci would easily be able to adapt to the different challenges that playing back in Serie B would present. 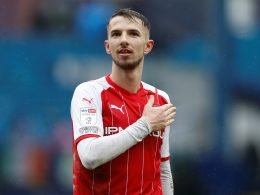