Wolves in discussions with Ajax defender

Ajax defender Nicolai Boilesen is closing in on a permanent move to Championship side Wolverhampton Wanderers according to Express and Star. Representatives of the player were in discussions with the club today, after a fee was agreed. The fee is believed to be in the region of £300,000.

The 15-cap Danish international is capable of playing either at centre back or left back, which have been problems areas for Kenny Jackett this season. The 23-year-old hasn’t featured for the Dutch giants this season because of a ‘contract dispute’. After rejecting the offer of a new contract last summer, Ajax boss Frank de Boer has frozen the player out ever since.

The defender had set his sights initially on a move to the Premier League and Aston Villa did express an interest. It would appear that other European clubs have also been chasing his signature, but the fact representatives of Boilesen have been in contact with Wolves is a sure-fire positive sign he will be heading to Molineux.

Ajax director of football and former Arsenal and Barcelona wide-man Marc Overmars is believed to have confirmed Wolves are interested in the Dane. Boilesen has played over 50 times for Ajax, scoring his first and only goal in 2013.

He would certainly add a degree of versatility to Wolves and obviously provide a huge degree of talent, just as any player that has been educated through the Ajax setup. There is a chance that a deal could go ahead before this weekend.

Reading to beat Brentford in race for Man City player

Swansea City welcome Luton Town in the Championship tomorrow afternoon. Swansea City have had a mixed start to… 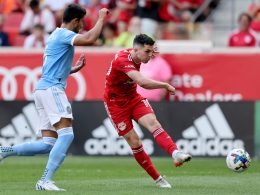 Huddersfield Town are no longer pursuing a move for New York Red Bulls winger Lewis Morgan, according to…
Total
0
Share
0
0
0
0