It’s December 2008 and Ken Hodcroft, Hartlepool chairman, fires Danny Wilson after four games unbeaten in League one, the club placed 13th. At this time there was aspirations for promotion surges into the Championship and a flurry of quality players graced the Victoria Park turf. The fans were being spoilt having suffered in previous years, but the abrupt fall from grace they have been dealt by owners IOR, Ken Hodcroft and a spate of incapable (or financially unsupported) managers could not have been apprehended.

It is a deeply sad time in Hartlepool, compounded by a national humiliation in the FA cup to 7th tier Blyth Spartans on BBC, and it looks too late to salvage their football league status. The embarrassment of the cup defeat appears to have been the final straw for chairman Ken Hodcroft who fired Paul Murray the following morning, with rumours it was confirmed over the phone after punishment training had been postponed.

The summer’s retained list, apparently conducted by then manager Colin Cooper, made interesting reading with Andy Monkhouse and Simon Walton departing the club, despite their significant role in keeping the club in the football league. This has proven to be a large component in the undoing of the club with the replacements brought in, notably ex Boro players Stuart Parnaby and Matthew Bates, failing to adapt or play to League 2 standards. However, their Premier League experience means they must be good…

…This could not be further from the truth. Missing man Stuart Parnaby has played his last game for the club after suffering a knee injury and Matthew Bates has performed embarrassingly poor for the club he was only signed for because he was an old friend of ex manager Colin Cooper. Marlon Harewood continues to flatter to deceive and the alarming loss of form from apprentice of the year Brad Walker suggests all is not as it seems behind the scenes.

Paul Murray, after six weeks in charge, has been fired with Will Donachie following him out the door. It would appear that he managed to construct a side worse than the one that came before, having been allowed to add eight new players to his side’s roster to no avail. Murray, a hard tackling and passionate center midfielder for ‘Pools, posited to the press upon his appointment that he would replicate his playing style upon his mentally and physically weak set of players. Having witnessed the debacle that was the second half against Blyth Spartans, Murray can have little complaints on his sacking. It is a shame, for his first forage into management is now blighted in the same way Colin Cooper’s was and John Hughes’ who came before.

It is worth noting that Murray, an inexperienced and brave man taking the job in the first place, was paired up with an assistant he had never worked with before in Willie Donachie. He also tried to sign players of a better caliber than what the club already had but was forced to sign low budget players from non-league outfits such as Dunston and Harrogate. Starlets Jack Baldwin and Luke James were sold on transfer deadline day for record fees, leaving no allowance for replacements to be sought after, with the capabilities of the playing staff heavily depleted. To further add insult to injury, Peterborough owner Darragh MacAnthony was permitted to announce the acquirement of ‘Pools finest talent live on BT sport, with Luke James moving for a fee to be received in dribbling instalments.

Unfortunately the upper echelons of Hartlepool United are notoriously trigger-happy and Murray’s quick fire appointment and sacking was inevitable. Essentially, Paul Murray left a stable job at Oldham Athletic on assurances that were never completely sanctioned. Whether his managerial ability was too far tested, some could argue he was operating with a hand behind his back. Thankfully supporters will remember him fondly for his top class performances for the club rather than a damning relegation into football’s dead water division.

The Hartlepool United manager’s job has become a poisoned chalice in recent years. It is now hard to look past current center back Sam Collins for the manager’s job, for the likes of experienced Brian Laws will undoubtedly swerve any advances for their managerial services. It is common consensus amongst fans that an experienced lower league manager like Paul Sturrock or Brian Laws is the requirement but it is expected that a rookie coach will be given a baptism of fire at ‘Pools.

Cut adrift at the bottom of League 2, with the smallest squad of players in the last ten years, Hartlepool and their unambitious owners appear to be winding the club up for a paltry demotion to the Conference and potentially worse, liquidation. Hartlepool’s loyal but hurting fans have started to vote with their feet with attendances starting to dwindle. This will not be enough to instigate action. Chairman Ken Hodcroft has confirmed that the club must stand on its own two feet and be self sufficient, with job cuts and player wage budgets clipped extensively. Loan players have come and gone without success and any incoming manager is now saddled with a set of players compiled by two different managers who comprehensively failed.

Its only December but the grim reaper has made his way to Victoria Park and chairman Ken Hodcroft has already let him in. 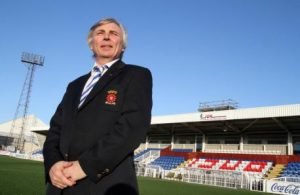