Reports coming out of France are that Leeds United are one of a  number of clubs to be after the  22-year-old, Delort was the joint leading goalscorer in Ligue 2 last season accumulating 24 goals in 36 games for his current club Tours. Spanish side Athletico Madrid are currently leading the chase however with the extra funds from the sale of Ross McCormack Leeds want to re-invest into the squad with Delorts agent & father meeting with Leeds representatives. 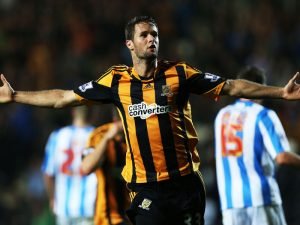 Wolves in the hunt for new Striker

According to the Hull Daily Mail, Hull’s out-of-favour striker Nick Proschwitz may be on his way to Wolves. The German joined the Tigers two years ago for a commanding £2.6m fee but has failed to impress since his move from SC Paderborn 07. The 27-year-old spend the second half of last season on loan at Barnsley appearing 14 times for the Tykes. Now it looks like Proschwitz may well join Wolves for nothing with Kenny Jackett looking to bolster his attacking lines.

The Ilford Recorder have covered Leyton Orients pre-season victory over Dartford. News filtered through that former Wolves Left-back George Elokobi was on the bench for the O’s and was set to play the second half of the game to try and impress O’s boss Russell Slade. The 28-year-old left Wolves at the end of last season after only making a handful of appearances since Kenny Jackett took over the helm.

Leicester City have been added to the race to sign Swansea City‘s Flynn Downes. A report from The…

According to the Yorkshire Evening Post, Leeds United attacker Tyler Roberts has interest from Queens Park Rangers and…
Total
0
Share
0
0
0
0