The Express has reported that MK Dons are having to fend off interest in two of their young starlets.

England Under-19 International Brendan Galloway has formally asked to leave the
League One club with reported interest from a host of Premiership clubs.

Galloway made 13 appearances last season however now seems to of had his head turned by the lure of Premiership football:

“We are devastated that Brendan wishes to leave, as we feel our first team is the best place for him at the moment,” ~ stated chairman Pete Winkelman.

Everton are believed to the the club in pole position to land Galloway who was given his debut at the tender age of 15 for the Dons.

The other Dons youth academy player rumoured to be leaving the club is Dele Alli, the 18-year-old was one of the foundation players last season appearing 37 times for the club. 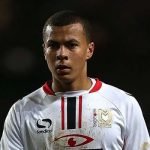 Liverpool are hoping to complete a £3.5m move for thr wonderkid, The North west club have opened talks with the Dons over Alli who is viewed by some as the brightest young talent outside of the Premier League.

Alli was given his debut at 16-year-old and has since become a regular for the club last season, making 37 appearances and scoring seven goals, despite his age.