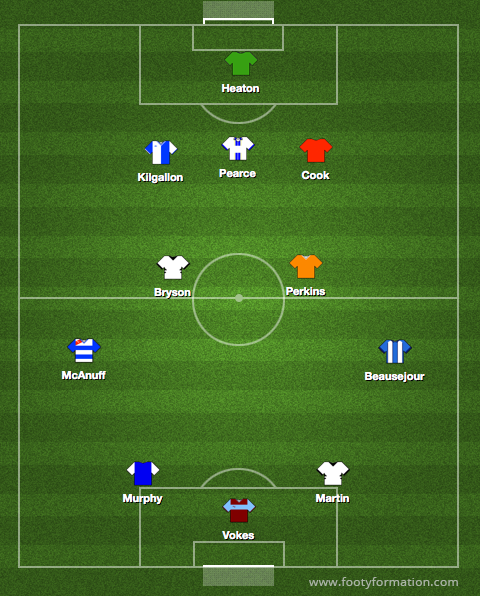 In goal in this edition of the team of the week is Burnley keeper Tom Heaton. The Clarets made the trip to the recently improving Charlton who had not been breached in any of their last three. Heaton had a busy afternoon at the Valley as Burnley had to battle to break down a well organised Charlton side. Goals either side of half time set the game up and some tidy work from Heaton ensured another clean sheet and another big three points for Burnley.

The defence this week puts together three centre backs. The trio of Blackburn’s Matt Kilgallon, Leeds’ Jason Pearce and Bournemouth’s Steve Cook were at the heart of their respective sides positive results. Kilgallon and Blackburn had the tough task of trying to keep the league leaders Leicester at bay. For the majority of the game they did admirably and dominated the game. Kilgallon was agile and aggressive at the back, resulting in the Foxes being more than happy to take the point away from Ewood Park. Jason Pearce has been at the core of the Leeds defence all season and had plenty of days to forget. On Saturday, however, they dug in and despite the apparent lack of a clear attacking system managed to grind out a 2-1 win over Millwall at Elland Road. Steve Cook and Bournemouth tasted heartbreak in midweek when they conceded late on against Charlton in a gritty game. Their match against Barnsley was very similar although this time it was Bournemouth who netted late on with Cook bundling the ball home with pretty much the final kick of the game. It was another solid defensive display from the Cherries who have conceded just one goal in their last 5 games.

A midfield four to match any side in the Championship in the team of the week featuring Reading’s Joby McAnuff, Derby’s Craig Bryson, Blackpool’s David Perkins and Wigan’s Jean Beausejour. Reading needed a big performance if they were going to come away from St Andrews with the three points and McAnuff stepped up to the plate. The Reading skipper netted an important brace for the Royals with a goal late on in both halves. The first was a calm finish when he was given too much space in the box and his second came when he nicked in at the far post. Craig Bryson is a big game player and they do not come any bigger for Derby than a game against their age old rivals Nottingham Forest. Bryson was at it from the off and his deflected shot opened the scoring within five minutes. His second came midway through the first half when he was picked out by Chris Martin and he completed his hat-trick and the embarrassment for Forest from the penalty spot. The midfielder has a staggering fifteen goals for the season. David Perkins showed all that had been missing for Blackpool in the last few months to record successive wins at Bloomfield Road.  The midfielder battled all game and stole the ball early on to feed Ricardo Fuller to score the opening goal of the game after just four minutes. It was far from pretty from Blackpool, but wins is what they need and Perkins application was the key to this vital three points. The Wigan warhorse continued to roll on after a stumble in midweek, drawing at home to Yeovil. The Latics trailed at home to Watford, but Beausejour pegged the Hornets back when Almunia could only parry the Chilean’s volley back to him giving him a simple finish. Wigan have now won 9 of their last 10 games and sit 5th in the table.

A forward trio this weekend that would send shivers down any defence made up of Ipswich’s Daryl Murphy, Burnley’s Sam Vokes and Derby’s Chris Martin. Murphy was given the role of leading the line for the Tractor Boys, his work rate and willingness to sacrifice himself for the team would have delighted boss Mick McCarthy. Murphy got something to show for his efforts when he put the game to bed with Ipswich’s second heading home late on, after he nodded down for Tommy Smith to open the scoring earlier in the second half. Sam Vokes has taking the limelight from strike partner Danny Ings in the last month or so.  With the latter out injured Vokes was the only major goal threat in the starting line up and he delivered netting the crucial second goal on 55 minutes from the penalty spot. Vokes has netted 57 goals in his 254 club appearances. 20 of those have been netted this season in his 42 games, just shy of a goal every other game. Chris Martin was identified as the key man in my weekend preview and he was a vital part of Derby’s 5-0 destruction of Forest. Martin may not have got on the score sheet himself, but he did provide the Rams with a focal point up front which was a major difference between the two sides. After being sent off against Burnley, Martin repaid his manger’s faith in him with a great performance for the team.

It will come as no surprise to you who is the team of week star man. Craig Bryson has performed consistently all year but his performance in the East Midlands was one of the best I have seen all season. Games do not come much bigger at this level and he seized it from the off and did not give Forest a chance to ever get out of first gear.