A full Championship programme this weekend produced some big results at both ends of the tables with some real stand out performances. Players from no fewer than nine Championship sides feature in this weeks team. Find out who made it here. 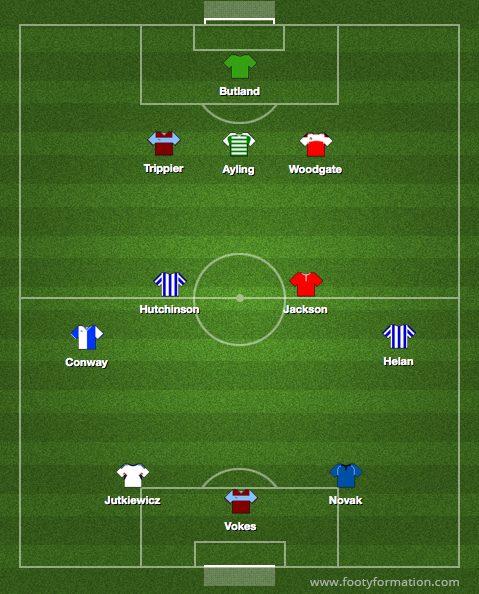 In goal this week is Jack Butland. The young keeper joined Leeds on loan this week and made an instant impression to the fans. The England international was forced into a number of saves to keep the scores level in below par team performance from Leeds.

A back three in defence in the team of the week. The trio of Kieran Trippier, Luke Ayling and Jonathan Woodgate all had excellent games for their respective sides. Tripper has been a common part of the team of the week this season and is a vital member of the Burnley team. He put in another solid display up and down right flank at Turf Moor in their 3-1 win over Nottingham Forest. His far post cross was met by Vokes to double the lead half way through the first period. Yeovil went into their game against Doncaster knowing it was almost a must win if they had hopes of avoiding relegation. Ayling rose to the occasion, refusing to let the Rovers front line breach the Glovers goal. His calm and steady performance epitomised the Yeovil win over their relegation rivals. Woodgate may be coming towards the end of his career, but he showed he is still a quality defender. He led the Boro defence and they kept Ross McCormack relatively quiet in the goalless draw at the Riverside.

A very attack minded quartet in the midfield of this weeks team. In the middle we have Sam Hutchinson and Johnnie Jackson, whilst out wide we have Craig Conway and Jeremy Helan. Hutchinson joined Wednesday on loan from Chelsea and has made great impact at the Owls. The young talent battled hard helping his team to another impressive away win. The league table does not read well for Charlton fans and players at present, but captain Jackson showed the fight and spirit to inspire the Addicks faithful. He dug in all game in the face of wave after wave of Q.P.R. attack and he was not going to give them an easy ride. Then late on he showed that he wanted it more than his opponents to score a late winner and maintain hopes of survival. Craig Conway ended his loan at Brighton and joined up with Blackburn on a permanent deal on deadline day and has made a fine start for Rovers. He announced himself to the fans on Saturday in only his second appearance by netting smartly on the break after they spent long periods of the game on the backfoot. A second representative for the Owls in winger Helan. The tricky wideman had a great day for Wednesday up against Yorkshire rivals Huddersfield. Helan netted the opener and eventual winner when he seized his chance following a fortunate ricochet that fell straight to him in the penalty area.

Five goals and a trio of excellent performances from the front three in this weeks team. Lukas Jutkiewicz, Sam Vokes and Lee Novak are all proving vital for their sides varying aspirations for the rest of this Championship season. Lukas Jutkiewicz has hit the ground running at Bolton and added another goal to his ever impressive record for the Trotters. An opportunistic finish from the forward prodding home a Jay Spearing free kick proved to be decisive against Watford. Alongside Joe Mason, he could be a vital addition to help Bolton turn things around after a truly shocking winter. Sam Vokes is hot on the heels of his strike partner Danny Ings in the goal charts. Vokes’ ten minute brace in the first half ended the contest before it really got going against promotion rivals Forest. The target man has netted 7 goals in his last 8 Championship games and has 17 in the league this season. Lee Novak turned the game at Bloomfield Road on it’s head with two goals in the second half. He levelled the scoring with a cool finish from the edge of the area, before he headed the winner with less than ten minutes to go, giving the Blues just their second win of 2014.

The star man in this weeks team is Sam Vokes. The forward has evolved into a real goalscoring force this season and netted twice to help Burnley brush past rivals Forest at Turf Moor. Vokes had scored 14 goals since leaving Bournemouth in 2008 before the start of this season, but he has already netted 17 in this Championship campaign.