Just seven Championship games this weekend with several sides in FA Cup action. Find who made a shortened edition of the Championship team of the week. 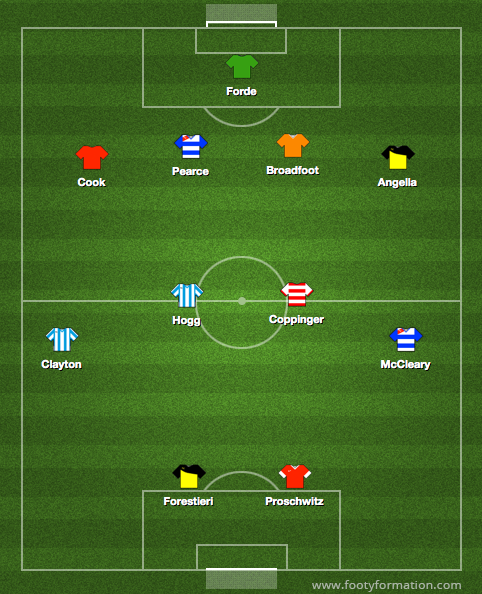 In goal in the Championship team of the week this week is Millwall keeper David Forde. The Irish international has featured several times this season in the team of the week and once again put in a top display to help earn his side a vital point against the struggling Bolton. Forde made a number of key saves and stoppped Lukas Jutkiewicz from the penalty spot.

The back four this week features a four man defensive unit of commanding and confident professionals. Steve Cook has returned from injury as if he never been away with a great display against the deadly duo of Ings and Vokes. Assured on the ball, physical and the air and quick across the ground, an all round top performance from Cook. Alex Pearce was wrongly sent off early on last week and after having the suspension rescinded started against Q.P.R. Pearce was dominant at the heart of the Royals defence closing the game out with ten men. He headed the second and eventual winner with a great run to get on the end of a deep corner. Kirk Broadfoot was at the heart of the Blackpool defence that kept their first clean sheet in fifteen Championship games. With this improved back line they can start to build a plan to try and get back on track going forwards. Gabriele Angella showed real maturity in Watford’s 1-0 over Middlesbrough. The Hornets had to cope with ten men for over half an hour and Angella put his body on the line for the team earning a second successive clean sheet in a row.

A creative midfield quartet this week featuring two Terriers, a Royal and a Viking. The first Huddersfield player to feature is the man of the moment Adam Clayton. The midfielder’s beard is almost getting as much talk as his play on the pitch. Another fine goal earned his side three points away at Birmingham when he fired home from 25 yards. The second Town player to make the team is Jonathan Hogg. The midfield enforcer was commanding and bossed the midfield battle at St Andrews setting the Terriers up for the win. Club legend James Coppinger led by example for Doncaster in their crunch game against Barnsley. The attacking midfielder netted a brace which looked set to give Rovers the three points until they conceded late on. Garath McCleary netted another contender for goal of the season at Loftus Road on Sunday. A great creative performance was capped off with the sensational solo effort which topped his effort in the reverse fixture earlier in the season.

At the top end of the pitch two new faces to the Championship team of the week. Fernando Forestieri was at his creative best for the Hornets in their 1-0 win against Middlesbrough with a goal being the only thing missing from his performance. The forward was brought down in the box to give strike partner Troy Deeney the chance to score the winning goal from the penalty spot. Partnering Forestieri is Nick Proschwitz of Barnsley. The big front man netted a brace for Barnsley to steal a vital point late on against Doncaster. The loanee from Hull opened the scoring in the first half and then scrambled in a late cross with time all but up to take a point back to Oakwell.

This week’s star man is Nick Proschwitz. The striker saved Barnsley from what would have been a disastrous defeat against relegation rivals Doncaster. His two goals capped off a great display of forward play from the man on loan from Hull.