The midweek fixtures always seem to be full with drama and goals. This Tuesday’s action did not disappoint with over 30 goals scored in the 11 Championship games. Find out who made the Championship team of the week here. 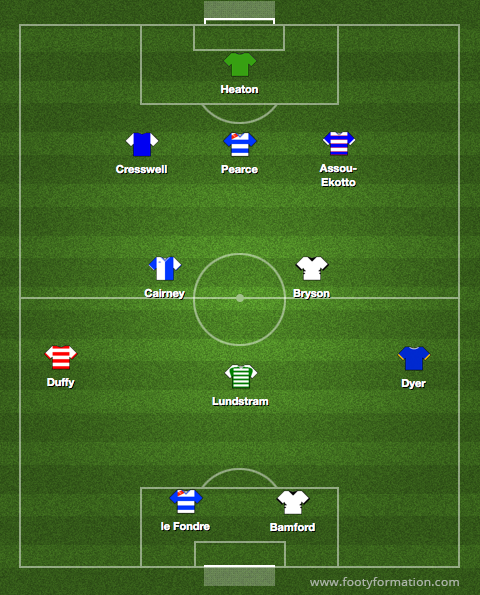 Between the sticks in the Championship team of the week this week is Burnley stopper Tom Heaton. The keeper had a busy day by Burnley standards and had to be right on his guard to stop Andrea Orlandi when the Brighton man fired from close range late on. It could be a vital point for Burnley come May.

A three man defence this midweek in the Championship XI. The trio of Aaron Creswell, Alex Pearce and Benoit Assou-Ekotto. The Ipswich defender Creswell had a solid game for the Tractor Boys causing more frustration for the Leeds fans. Deserved a clean sheet but was let down when Luke Chambers gave away a penalty. Pearce has been Mr Consistent at the back for Reading this season and an organised performance from the centre half gave Reading the license to take the game to Bolton. He also popped up with an assist for le Fondre’s second goal with a smart header across goal. QPR have been quietly going about their business and another fine display from full back Assou-Ekotto helped them see off Bolton. His great ball in gave Charlie Austin the chance to break the deadlock in the first half.

Some familiar faces and some new star performances in the five man midweek midfield which is made up of Tom Cairney, Craig Bryson and John Lundstram in the middle with Mark Duffy and Lloyd Dyer on the flanks. In a great game at Oakwell, Cairney was energetic and creative for Blackburn. His glorious strike from all of 25 yards flew into the net and levelled the game at 1-1. Craig Bryson only spent a couple of weeks out of the team of the week. 2-0 down to Yeovil could have descended into meltdown for the Rams, but Bryson rallied the troops and led by example. His shot from the edge of the area levelled the game with minutes to go and gave Chris Martin the chance to grab a late, late winner. In the same game, the young Everton loanee John Lundstram scored a thunderous shot from range to give Yeovil the lead. He then slid the ball down the channel for Ishmael Miller to run through and score a great solo goal. Doncaster have turned things around of late and Mark Duffy was at the centre of their 3-0 win over Charlton. The winger was a threat all day and topped off his performance with a fine goal to put the game past the Addicks in the second half. Lloyd Dyer has been a stand out player of the league the season providing vital goals and assists for his team and his emphatic finish gave Leicester the lead as they recorded a record 8th straight league win.

A real in form pair upfront in this weeks team in Adam le Fondre and Patrick Bamford. Le Fondre is enjoying getting a starting berth for the Royals at long last this season and it giving Nigel Adkins some much needed goals. Another hat-trick at home to Blackpool followed up his hat-trick last week against Bolton taking his league goal tally to 13. Bamford has been a great signing for Derby, on loan from Chelsea. After netting the equaliser at Blackburn on Saturday he got the Rams back into the game when his diving header flew Stech in the Yeovil goal.