4 things we learned about the Championship this weekend

The popular feature returns after a winter break to give you the interesting stories from the action in the Championship this weekend.

Being clinical is the key at the top

After a horrid display last weekend at Hillsbrough, Leeds came out in the early kick off with renewed impetus. It was hard to tell who was the league leaders with Leicester limited to efforts from range. A host of chances went by for Leeds. Newly instated captain Ross McCormack could have easily had a first half hat-trick and the easiest chance came when presented with a one-on-one with Leicester keeper Kasper Schmeichal, but he was indecisive. This set the tone for the rest of the game and the Leeds fans could almost sense what was coming. In the second half Leicester’s only effort of note before the introduction of Kevin Philips came when Matty James curled a shot just wide of the post. After several half chances a smart dummy from new signing Philips in the closing minutes set up the in form David Nugent who buried his only chance of the game, securing all three points for his side. One shot on target for Leicester and one goal. That was enough to stretch their lead at the top of table to five points. 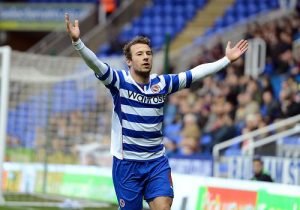 Reading’s game against Watford last week was Le Fondre’s first start since their game against Blackburn on the 23rd November. Since that game he has been in every match day squad, but only played a total of 70 minutes before last week. He was given another start yesterday at home to Bolton and showed Nigel Adkins why he should be playing more often. A first half hat-trick from Le Fondre put the game beyond Bolton and gave Adkins food for thought going into their trip to Ipswich next week. In recent weeks rumours have been building over Le Fondre’s future at the Madejski, with him saying that he was open for a move after getting frustrated with his lack of minutes. He has taken his chance in a starting berth and expect him to be a key part of the Royals plans for the rest of the season as they sit in the top six after an emphatic win.

Derby had a blip not a crisis

Coming off the back of three defeats in all competitions there were plenty of questions over Derby’s character to overcome this recent decline in results. Getting back to winning ways at home to Brighton was more important than the performance for the Rams. Taking that into consideration, Steve McClaren can be pleased with the work of his players. It was a scrappy game at Pride Park and it took substitute Patrick Bamford to break the deadlock. The forward on-loan from Chelsea scored his first goal for Derby and it could be a crucial one come May. All season it has been clear that the teams at the top of the table are those who can win both with style, but also grind out results when not playing at their best. This quality has been a question mark lingering over the Derby squad, however yesterday they showed this quality in abundance. As the old saying states: When the going gets tough, the tough get going.

Write off Barnsley, Yeovil and Doncaster at your peril

The feeling around the Championship, myself included, is that it is going to be difficult for all three of these teams to survive the drop this season. Football being the funny game it is, seems to suggest that there are going to be a few shocks along the way. All three of the sides filling the relegation places managed to pick up victories this weekend, pulling teams that may have felt safe back into the relegation mix. Barnsley heaped more pain on Paul Ince and Blackpool with a solid 2-0 win, courtesy of a goal either side of the break from Chris O’Grady, netting his first league goals since October. Yeovil travelled to the improved Birmingham and took the points thanks to a brace from experienced striker James Hayter, who now has six goals in four matches. After selling out of favour Paddy Madden to Scunthorpe, Hayter has upped his game and could help Yeovil perform a fairytale survival. Last but not least Doncaster. The Rovers had not won a Championship game since November, but they shocked the form guide by comfortably seeing aside Wigan who had not lost since the 7th December. Chris Brown netted twice to end Donny’s win-less run, which stretched back to November. Following the weekend’s results all of the bottom three will feel more confident about their chances of survival. Now just twelve points separate the bottom eleven teams in the Championship.