Team of the Week: League 2

Picking a Team of the Week in League 2 is never an easy task, but with some fantastic performances from players in every position this week, the task was made even harder. Find out who made the cut here…

Scott Davies – Fleetwood Town – Davies is one the key reasons why Fleetwood are in the top seven and he was in fine form again this weekend, making a string of fine saves to deny Oxford United on many occasions. He made a wonder save from a Dave Kitson header in the second half and also saved Danny Rose’s penalty. He could do little about Kitson’s accurate header in the dying minutes, and the ‘keeper will be very pleased with his days’ work.

Eddie Nolan – Scunthorpe United – Whilst Scunthorpe’s strikers will take all the plaudits this weekend, Eddie Nolan can be very satisfied with his work as well. The right-back put in a solid shift, in his team’s 3-1 victory over Torquay United, and helped his defence to nullify any Torquay threat. Nolan is currently thriving for the Iron, and their good form will be helping him no end.

Paul Reid – Northampton Town – Since Paul Reid’s return to Sixfields, Northampton’s form has taken an upturn. The rugged centre-half has enjoyed a run of very good form since re-joining the club, and his performance against Accrington this weekend epitomised what he is all about, as he successfully dealt with a forward line which threatened to be a big problem. As long as ‘Reidy’ is performing, the Cobblers purple patch is set to continue.

Michael Raynes – Oxford United – Michael Raynes put in a terrific performance against Fleetwood on Saturday, which helped keep his team at the top of the division. His height was a key weapon in seeing off Fleetwood’s front-line and whilst Oxford enjoyed dominance over their opponents, Raynes was key in ensuring that any threats to Oxford’s superiority were dealt with.

Ian Sharps – Burton Albion – In what was an extremely impressive win for Burton over Plymouth, defender Ian Sharps was key in ensuring victory. He cleared one off the line in the first-half and worked tirelessly to breakdown any Plymouth attacks all afternoon. Burton’s win has taken them up to sixth.

Ricky Ravenhill – Northampton Town – The Bradford City midfielder has been a revelation since joining Northampton on loan. He lifted the Cobblers to victory over Accrington this weekend, with a series of crunching challenges and dominated the midfield almost on his own. His terrific performance, and those which have gone before, led manager Aidy Boothroyd to reveal he will be pursuing a permanent deal when Ravenhill’s loan expires.

Steven Schumacher – Fleetwood Town – The dynamic central midfielder has been a key component in Fleetwood’s successt so far this season and his performances against Oxford this weekend was brilliant. He opened the scoring with a curling free-kick from a very tight angle before hitting the bar a few moments later. He worked hard in the second-half to contain a well-oiled Oxford side and his performance alone deserved more than a point.

Adam Chapman – Newport County – the star performer in today’s entertaining clash between Newport County and Chesterfield was Adam Chapman. He scored Newport’s second from the spot and one or two other chances to put the ball into the back of the net. He was a threat all day and his performance was crucial in ensuring victory.

Jack Redshaw – Morecambe – Jack Redshaw grabbed his first goal of the season in Morecambe’s 2-1 win over Mansfield this weekend. He was a handful for the Mansfield defence all afternoon and his 51st minute equaliser was exactly what he deserved. He went on to set up Kevin Ellison’s winner; jinking around two men in the right-wing position before crossing for the goal. He will be pleased with his performance and should be confident of scoring a few more over the coming weeks.

Dave Kitson – Oxford United – This week’s star performer is Oxford United’s Dave Kitson. The veteran striker led the line brilliantly on Saturday and was a constant threat to the Fleetwood defence as he forced a wonderful save from ‘keeper Davies, before winning a penalty. In the dying minutes, Kitson stepped up once again, to nod home an extremely accurate header, to send the U’s home with a well deserved point.

Sam Winnall – Scunthorpe United – Sam Winnall is having quite a season. The young striker joined the Iron at the start of the campaign and has quickly ascended to become their main man. He scored a terrific first-time shot into the top corner this weekend, against Torquay, before setting up Hakeeb Adelakun to score, with a wonderfully weighted ball after a strong run. This lad has a very big future. 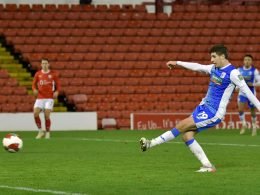 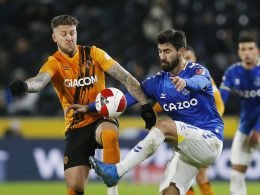