Most sides will be feeling refreshed and raring to go as the Championship returns from the international break with 3 games in 8 days for all the teams. This weekend sees two live televised games and some big clashes up and down the country. We preview 5 of the biggest fixtures from the Championship this weekend in detail.

The City Ground, Sunday 1:15 kick off

The game may be on Sunday, but I think all Championship fans will admit that there is no bigger game this weekend so where better to start our weekend preview. Everyone related to both Forest and Derby will remember the events that took place at the iPro Stadium on 22nd March 2014. The Rams embarrassed their midlands rivals with a 5-0 victory that left deep scars in the Forest fans. Just 2 days later Billy Davies was sacked, however after Stuart Pearce has guided the Reds to an unbeaten start to the season and the summit of the Championship table, Forest are sensing revenge. 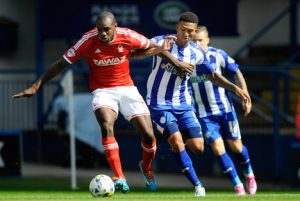 Throughout the summer new signings and players returning to fitness for Forest has developed a squad rich in ability and guile. They expressed both these qualities in the opening month of the season in smashing victories like the home win over Reading and tough battles like their victory away at Bournemouth. It has to be said that Pearce has been fortunate to maintain an almost fully fit squad to choose from so far this season, although you can not play down the part he has played in getting the club back heading in the right direction as they push for promotion. Michail Antonio has been a menace on the flanks for Forest and he was nominated for the Championship Player of the Month with 3 goals and as many assists in the opening 5 games of the season. His pace and power makes him a real handful and he is Forest’s key man in this massive clash.

Let us not forget who Forest are up against in Derby County. Everyone knows that they should have won the play-off final but it just was not meant to be. The Rams have started the season with a determination to put things right and have made it through a difficult opening month within touching distance of the early leaders. Steve McClaren is building something at Derby, but as is the nature of modern football it is very much a results business and failure to do so this season could cause doubts among some sections of fans. It remains early days this season and 3 points at their biggest rivals would be a statement to the rest of the league from Derby. Midfielder Craig Bryson scored a hat-trick in the 5-0 win back in March and his late runs into the box and lethal finishing makes him a big threat. He is the Rams’ key man in this match.

A meeting of two sides that are not going through a great time of things at present. A result for either side could kick start their season.

Just a single win to show for their efforts in the opening month has led to tension amongst fans of the Blues. Lee Clark’s side did finally manage to win at home after failing to do so throughout the whole of 2014 up to the start of the season. That remains the only positive thus far and a 4-0 loss at Wigan to end the month left discontent amongst supporters. It sums up the state of the club when some fans take to social media to celebrate the news of Lee Novak’s injury. Something I never thought I would write. Stories in the week surfaced that Birmingham were in talks with former Chelsea and France international Florent Malouda, but Clark and Malouda’s stories were rather different. The Blues manager claiming that it was becoming difficult to agree terms, whilst the Frenchman’s comments that he posted on his twitter account can be viewed below leaving Birmingham short of players and short of motivation ahead of a busy period. Clayton Donaldson has scored 2 goals so far since his move from Brentford and he is this game’s key man.

Just saw another story linking me with a championship club. I don’t know any Lee Clark. Must be ice bucket challenge collateral damage …

Leeds remain without a manager after the international break despite reports that retired strikers Jimmy Floyd Hasselbaink and Robbie Fowler have both shown an interest in the role. United did record their second win of the season before the internationals with a hard fought 1-0 win over Bolton at Elland Road. Everything is far from rosy at the Yorkshire club and it could be a blessing to have this spell of game after game so the focus can turn to matters on the pitch. After the final hour exits of Matt Smith and Dominic Poleon on transfer deadline day Leeds displayed a crash course in how not to use social media as they appeared to be building up to a new signing for the club. Earlier in the day they did acquire a pair of new signings on loan in Dario Del Fabro and Adryan. The latter could be in line to make his debut at St Andrews.

The Valley, Saturday 3:00 kick off

After the opening month of the season these two clubs were amongst the earlier pace setters both currently occupying a top 6 spot. It has the makings of a very entertaining game.

The Addicks are arguably the surprise package of the Championship so far with 2 wins, 3 draws and just a single defeat at promotion chasing Derby. An impressive start for new boss Bob Peeters in his first job in English football and quite a change for Charlton who have had to deal with battling relegation and being at the wrong end of the table for the last couple of seasons. A major difference to previous campaigns is the rate at which Charlton are finding the net, 9 goals from the opening 5 league games. 5 of these goals have been scored by new striker Igor Vetokele  who has hit the ground running in the Championship. The former FC Copenhagen frontman picked up the Championship Player of the Month award and he is this game’s key man.

Football really does continue to surprise and shock week after week. After the 4-2 win over Huddersfield Beppe Sannino resigned from his post as head coach saying  “[he had] gone as far as I can” at the club. His replacement, former Brighton boss Oscar Garcia, is walking into a new job with a team tgat sit 2nd in the table and just a single point behind leaders Nottingham Forest. He also has a squad built to push for promotion and under his stewardship will have every hope of earning promotion to the Premier League if the players can apply his methods on a regular basis. Striker Troy Deeney has committed his future to the club with a new 4 year deal and has rekindled his former partnership with Matej Vydra with ease. As Forest play on Sunday a win for the Hornets could see them at least temporarily top of the table, but it will be no easy task seeing of this revitalised Charlton side.

A steady start to the season for both of these former Premier League sides and with the transfer window now shut they will be looking to build a run of results.

Cardiff made a par start to the season by their aims in pushing for promotion putting 8 points on the board from the opening 5 games. The Bluebirds have been handed a tricky start to the season and they are still in the midst of a difficult run that will continue to test their squad depth. Progression in the League Cup sets up 7 games in 21 days for Cardiff and it is an opportunity to notch up some points and climb up into the top 6. Ole Gunnar Solskjaer has one of the widest ranges of striking options to choose from in the Championship (Norwich are not far behind), but Kenwyne Jones has been the man of the moment so far with 4 league goals already. Adam Le Fondre and Federico Macheda are among the strikers waiting to get off the mark in the league and they will all play a vital part at some stage this season.

Norwich have showed that little bit extra in comparison to Cardiff with 2 more points on the board for Neil Adams and his Canaries. After an opening weekend defeat to Wolves the squad has upped their effort levels and currently stand unbeaten in 5 games in all competitions scoring 11 goals and conceding 3 in that run. Deadline day saw Norwich sell long time servant Andrew Surman to Bournemouth as he looks for more regular game time, but they did also sign a couple of new players. Ignasi Miquel joins on a 3-year deal from Arsenal whilst fellow defender Jos Hooiveld signs on a season long loan from Southampton. The latter was a key part in the Saints promotion to the Premier League in the 2011/12 season and he will be hoping to repeat that feat with Norwich. The Canaries managed to hold onto key players in the window and one of those includes Bradley Johnson who has been with the club since 2011. The midfielder is the club’s vice-captain and in a game that will be tough test he is the key man who will look to control the game.

Even the international break could not give Blackpool a chance to rest, but more on that later. They face a Wolves side who have made a superb start to the season and will be tasting another victory at the hands of the Tangerines.

If Watford’s manager leaving whilst 2nd in the table was odd, events at Blackpool this week were nothing short of crazy. After publicly criticising manager Jose Riga, the Tangerines chairman made an approach for Burton manager Gary Rowett only to the see the boss of the League 2 club turn down talks. All this taking place whilst Riga prepares his threadbare squad for this weekend’s match where Blackpool look to get their first point on the board. Riga’s assistant left the club this week and in an interview with BBC Radio Lancashire he explained that he had been working unpaid “No. I didn’t have a contract so I left.”. This is not a way to run a football club and as I have said previously this season it seems the struggle for Blackpool fans will continue and life in League 1 next year becomes more of a certainty. Riga is short of players as it is and Jose Cubero still awaits a work permit and Jacob Mellis is sidelined through injury, what a sorry state of affairs for a club that was playing in front of sold out crowds in the Premier League a few years ago.

Wolves express how a football club can turn it around and possibly offer hope to Blackpool that after a few backwards steps a club can once again head in the right direction. Kenny Jackett has been the figurehead of this revival taking over the club in the summer of 2013 and guiding them straight to promotion back to the Championship and he has not stopped there. A blistering start to the season taking 12 points from the opening month gave Jackett the Manager of the Month award for August and the opportunity to sit top of the table at the close of play this Saturday. The Wolves boss has the luxury of a fully fit squad to choose from and he will be left with the fortunate headache of choosing which players to leave out over who should be included. Bakary Sako is the current top scorer for Wolves with 3 goals and he is this game’s key man.

Other fixtures with score predictions

Barnsley and Hull City battling it out for Burton Albion midfielder