The 22-year-old will be a Sky Blues player until January 4th 2015 after completing the deal late into the deadline day. 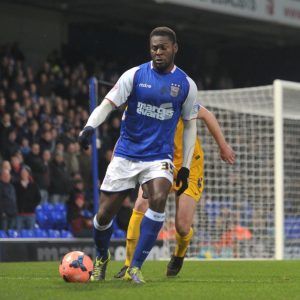 Nouble has signed for Coventry on loan

“What you get with Frank is a quick, mobile, powerful striker and that is exactly what we are looking for,” said Coventry manager Steven Pressley, speaking to the club’s website.

“I spoke to Frank about what he wants out of a move to Coventry City and his ambition certainly aligns with my expectations and I’m looking forward to seeing the positive impact I believe his addition will bring.

“I’m certainly excited to see what he is capable of and now we find ourselves in a situation where we have a number of strikers all eager to claim a starting place in front of more than 20,000 City supporters at the Ricoh Arena on Friday.”

Nouble began his professional career at West Ham United and managed one goal in 13 league appearances for before moving to Wolves. He joined Ipswich for an undisclosed amount in 2013 and has played 56 games for The Tractor Boys.

Birmingham City’s Karanka should use Middlesbrough links for signings

Luton Town should go all out to sign Chelsea player