Peterborough United have confirmed the signing of Hartlepool striker Luke James for an undisclosed fee.

The 19-year-old striker, who had been linked with numerous clubs this summer, put pen-to-paper on a four-year deal at London Road after passing a medical.

He has been awarded the number nine shirt, that has been left vacant by Britt Assombalonga who moved to Nottingham Forest. 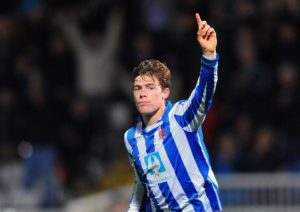 Luke James has been given the number nine shirt

Speaking to Peterborough United’s website, manager Darren Ferguson said: “I am delighted to get this bit of business done. I think everyone is aware that we have been interested in Luke for quite a while. We have had to be patient, but we have used our experience from other deals in this transfer.

“I am grateful to my chairman and to Barry Fry for getting this deal over the line. We are delighted to get him. We felt we needed a number nine. He is a goal-scorer, he has a great attitude and he can’t wait to get started.”

Despite his young age, James made 96 appearances for Pools, scoring 22 goals. He won Hartlepool’s player of the season last year after netting 15 times.

Birmingham City’s Karanka should use Middlesbrough links for signings