We are only in Week 2 but it already feels like we are back into the swing of things, especially with the midweek fixtures already coming thick and fast. It was another high-quality weekend of action that saw plenty of goals, incidents and unfortunately our first two 0-0 draws, even if no-one can work out why there wasn’t a goal at Hillsborough.

Our stat this week sees us kicking a team while it’s down, Huddersfield Town have failed to keep a clean sheet in 13 games with their last shut-out coming in March. Sorry about that Terrier’s fans, I’ll be nice when you play better. On to the awards:

FANS OF THE WEEKEND: Rotherham United 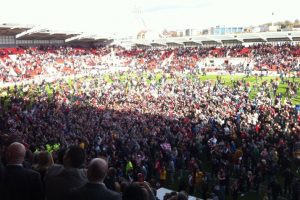 There has been a lot of hurt in Rotherham in the past decade, with a few bouts of administration and relegations, but yesterday was a time to rejoice and boy did their fans do that. It was pratically a packed house at the New York Stadium, with fans making a great atmosphere from start to finish.

That backing helped their team pick up a lucky 1-0 win against Wolverhampton Wanderers but after failing to get the rub of the green last week, they’ll be delighted to get off the mark. The Millers should be looking to make themselves safe before setting any other objectives this season but getting a win in early will help relax those start of the season jitters.

A skilled, long-range loft from 23-year-old Kyle Bennett wins out this week despite his goal only being a consolation in Doncaster’s 3-1 defeat at home to Port Vale. Ignoring that, it was a sublime effort that looked to hang in the air for an age before dipping beyond Sam Johnson, helpless in the Vale goal.

It’s a shame that it didn’t really mean anything in the grand scheme of things, Port Vale were excellent on the day and thoroughly worth the three points in the end. Doncaster will want to pick themselves back up quickly if they want to challenge near the top of the table, more top quality finishing like this one could see them back in the groove sooner rather than later.

UPSET OF THE WEEKEND: Fulham 0-1 Millwall 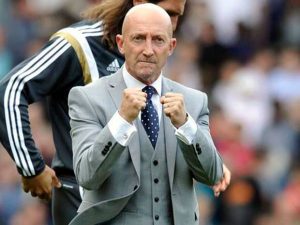 Looking at the table, this wasn’t an upset. Looking at where both these clubs were 12 months ago, it’s a monumental result for Millwall to take three points away from home against the relegated Premier League side. The London derby provided a slightly dull affair but Millwall will not mind, another three points sees them second after just two games.

Manager Ian Holloway has really transformed the club since coming in last season and his hopes of a potential playoff push are beginning to look much less unlikely than many though in the off-season. If they carry on like this, Millwall won’t be popping up in the upset category for much longer.

BLOOPER OF THE WEEKEND: Cambridge’s crazy own goal

Oh deary me, this was a calamity. Despite Portsmouth being down to 10 men and Cambridge United on top, the newly promoted side gifted the South Coast team the win with an own goal that will be replayed on compilation DVD’s for years to come.

After a shot was saved by U’s keeper Chris Dunn, it spilled to his defender to clear. Except his clearance hit another defender, rebounding with some velocity into the back of their own net. It gets more odd, the own goal has strangely been awarded to Dunn, despite the goalkeeper seemingly not having the final touch. Or the second to last touch. It’s a blooper within a blooper this one.

After paying £5.5 million for a player, you want him to produce early on and thankfully for Forest, Britt Assombalonga has already began to pay back his hefty price-tag. He was a menace all afternoon, running around the Bolton back-line before scoring a tidy header and winning the penalty before nut-megging Alan Bogdan with his spot-kick.

Forest fans will be hopeful that the 21-year-old will help fire them to the Premier League and with four points from their first two games, the future looks bright at the City Ground. And if he scores more goals, it could take a huge amount of money from a big club to prise him away from Stuart Pearce.

A local derby, two good sides, five goals and an all-round great game, what more could you ask for? Peterborough looked to have taken a hold of proceedings after getting a goal just before half-time but Dele Alli replied early on in the second half to make it 1-1.

Two goal in four minutes from Posh substitute Kyle Vassell eventually gave Darren Ferguson’s men the win despite a late consolation from Daniel Powell. An unbeaten start for Peterborough will give them hope in challenging for those automatic promotion spots whilst MK Dons fans will wish that their side can stop being in entertaining, high-scoring affairs unless they win them. 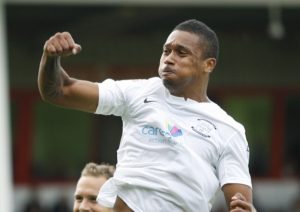 A goal and two assists is very hard to argue against and rightfully so, it’s an impressive performance from winger Chris Humphrey in Preston’s 4-0 win away at Scunthorpe. Two dangerous crosses that led to Joe Garner scoring with a neat finish and forced Miguel Llera to put through his own net was good enough but Humphrey cut inside in the second half to curl an effort in himself.

The win will be a big boost to promotion-chasing Preston, who fluffed their lines last week when they were heavy favourites to beat Notts County. They also broke Scunthorpe’s impressive home record and inflicted Russ Wilcox’s first defeat at Glanford Park, much in part to the 26-year-old Jamaican international’s input.

TEAM OF THE WEEKEND: Plymouth

It feels really, really good to beat your local rivals. It feels even better when you do it in a commanding display that shows the rest of the league the talent you have in your squad. The Green Army had a magnificent performance against Devon rivals Exeter where Reuben Reid could have had a brace on another day and young prospect Tyler Harvey showed his class with a goal and a superb assist.

John Sheridan will be delighted with the display and he will hope he can give his side that magic touch that he gave Chesterfield a few years ago that saw them promoted to League One. They’ve certainly shown what they can produce, if these results become more common then Plymouth could go flying up the table.