Ladies and gentleman, welcome back to the Football league. The72 are delighted that the new season is under way and that also signals the return of our FL Weekend Awards. There’s a few new awards this season to look forward to, along with a little football stat to share with your friends.

This week’s stat is that there hasn’t been a single goalless draw in the entire Football League so far, rejoice and long may it continue. And before you start arguing, the awards attempt to go across as many games as possible, unless it’s impossible not to give someone the award. So without further ado, here’s the awards for the opening weekend.

FANS OF THE WEEKEND: Luton Town

It was a delight to see the Football League fans back out in force across the country but only one team can win the award and on the opening weekend it’s a tip of the hat to Luton Town supporters. The Hatters took over 1,000 fans up north for their first game of the season against Carlisle United and were even treated to a slightly nervy 1-0 win that made the trip worthwhile.

They will need their supporters to keep following them round the country as the Luton faithful hope to push their side towards a promotion spot in League Two this season. They’ve got off to a great start, if they can show that kind of commitment each week then the players will get a huge life. Props to Forest fans too who created an insane amount of noise for the return of the Psycho, Stuart Pearce.

There were a few quality goals this weekend, Tom Cairney, Giles Coke and Chris Burke all scored some beauties but I’m going to give some props to young Cheltenham debutant Joe Hanks. After coming on as a substitute in the second half, the 19-year-old picked the ball up just outside the ball and just seemed to stroke the ball into the top left-hand corner, a sumptuous strike.

It helped Cheltenham earn a 1-0 victory against the bookie’s favourites for promotion and the Robins will hope to be back to competing for the playoffs after a poor 2013-14 campaign. Mark Yeates will be delighted that the youngster has contributed from the off and it could see more game-time this season for Hanks, we wish the young lad good luck.

UPSET OF THE WEEKEND: Brighton and Hove Albion 0-1 Sheffield Wednesday

You wait 17 games last season to taste victory last season and then you only need 90 minutes the next, football is a strange thing but Wednesday fans will be delighted to have got off the mark early this time around. Not many thought that the Owls could go down south to a talented Brighton side and take all three points but a cracking Giles Coke strike sealed all three points for Wednesday.

They were helped out by a very silly sending off for Brighton midfielder Andrew Crofts but luck favours the brave and in the end they deserved the win. Stuart Gray must have been doing backflips all the way back to Yorkshire last night and I don’t blame him, if his side gain some momentum early they could be an outsider for playoff contention.

BLOOPER OF THE WEEKEND: Bristol City’s new away kit

This new award will mainly be used for silly own goals, lasps of concentration or general bloopers but this award needs to go to whoever designed Bristol City’s away kit for this season. The purple and green combination jumped out of my screen on Saturday night and second glances must have happened for many, it’s a little bit of an eyesore.

Luckily it didn’t dampen City’s day as they took a very good 2-1 win away against fellow promotion-chasers Sheffield United and striking an early blow to one of your rivals will make their first win that much sweeter. Shoutout for Notts County’s poor away kit too but it redeems itself with its charity sponsor but you won’t find a kit more garish than Bristol City’s this season. 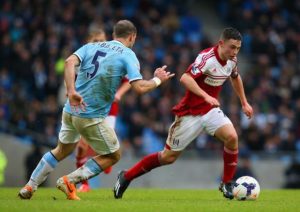 There are a lot of fantastic young prospects in the Football League and it looks like there’s one more to add to your lists at home this season. Patrick Roberts might have only played less than half an hour of Championship football but he certainly changed the way Fulham played once he took the field.

Confident, vision, clever running and always wanting the ball at his feet, he showed some excellent attributes for a player who won’t even be able to drink in a pub until February. He played nicely out on the right and should he continue to impress, the club might struggle to keep him come January time but Fulham will want to get the most out of him while they can.

We love goals, we love excitement and we love last-minute drama. Only one game had a little bit of everything this weekend and that was at Valley Parade as Bradford managed a 3-2 victory against a stout Coventry City side. James Hanson put the Bantams ahead with a great header but just before half-time, Reda Johnson rose to nod the Sky Blues back into the game.

A penalty from Alan Sheehan looked to have given Bradford the win but in the 89th minute, Johnson was there again and Coventry looked to be taking a point back to the Midlands. However, Hanson scored his second in injury time to send the Bradford fans nuts and give them a winning start to the season, an excellent opening day encounter.

After a few years in the wilderness with Southampton and not finding his feet on loan, Jonathan Forte has finally landed with Oldham Athletic. Two goals against Colchester United at the weekend on another day would have been enough for the Latics to take all three points but they will be happy to take a point from the Community Stadium.

The 28-year-old Barbados striker has never been a prolific goalscorer at any club but with a positive start at his new club, maybe a new style under Lee Johnson will do him the world of good. There might have been more impressive displays but seeing a player regain confidence on an opening day display is always pleasing to see. Unless you’re a U’s fan, of course.

TEAM OF THE WEEKEND: AFC Bournemouth 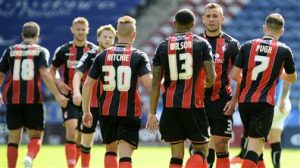 By far and away the performance of the weekend, Bournemouth start as they hope to go on as they demolished Huddersfield from start to finish in their own back yard. It took just 26 seconds for Marc Pugh to put the Cherries into the lead before debutant Callum Wilson notched his first goal for the club.

Yann Kermorgant made it three from close range before Wilson notched his second of the game, killing off a poor Huddersfield that will now be looking for a new manager after Mark Robins left this afternoon. It was a terrific start to the season for Eddie Howe, who will be ecstatic that his side and their new star signing all came out firing from the very first second of Championship football.

Opinion: Better the devil you know? Thoughts on Mike Ashley ‘linked’ with ‘Ipswich’.

‘Great to be back’ – Derby County boss on return to training