As reported by The72, both Anthony Pilkington & Sean Morrison are undergoing medicals with the recently relegated welsh club.

The Black Cats have snapped up Gulls winger Will Buckley for a reported figure of around £2.5m, the move will reunite the 24-year-old with former boss Gus Poyet. Buckley made 34 appearances last season for Brighton however will now want to make an instant impact at the Stadium Of Light

Ness moves to Crewe on loan 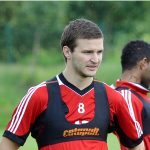 Scotland Under-21 International Jamie Ness has moved to Crewe Alexandra on a season long loan from Premiership outfit Stoke City.

28-year-old Jamie Ward was in the last 12 months of his contract with Derby, however Ward has now put pen to paper on a new two year deal pledging his future with the club until the summer of 2016.