5 FL strikers who could earn an upgrade in FIFA 15 Ultimate Team. 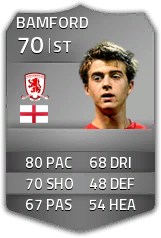 Bamford enjoyed a fantastic season and had an impressive goal tally across the Championship and League One. With 22 goals across 44 games last season, he was a real hot prospect and the TOTS that he earned truly proved his worth. With him starting the season unproven at MK Dons, his swift movement up the Football League may justify in a swift upgrade of his card.

With him set to sign for Middlesbrough, his card would be likely to lie at the North Eastern club and with his sharp-shooting and quick movement, he is justified to have a solid 80 pace attribute and 70 shooting. 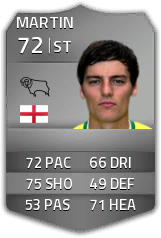 Derby’s star striker didn’t fail to impress and was arguably one of the hottest strikers around last season. With last seasons FIFA rating only at 69 for the striker, he is likely to have earned himself a serious upgrade after his fantastic performances almost lead Derby to the Premier League. It is likely his shooting and heading are to undergo the best upgrades with his pace not making a significant improvement.