The third round of 2018/19 FA Cup has been taking place over the course of the weekend, and as is the tradition in the world’s oldest cup competition, there has been a fair share of cup upsets.

At this stage of the competition, the 44 teams from the Premier League and the Sky Bet Championship are included, and whilst many of those get drawn against sides from the lower divisions, it never proves to be as simple in the FA Cup as beating a side who on paper, are further down in England’s football pyramid, as the likes of Portsmouth, Gillingham and Barnet proved this weekend.

Just last year, this round saw Nottingham Forest beat Arsenal 4-2 at the City Ground, as well as Wigan Athletic forcing Bournemouth to a replay before breezing to a 3-0 victory in the replay at the DW Stadium and Newport County dumping Leeds United out of the cup in similar circumstances.

Here are the five shock results from this weekend’s FA Cup third round.

Sky Bet League One side Gillingham were one of five clubs to dump a top-flight side out of the competition across Saturday’s matches.

In their first meeting with Cardiff City since both teams were playing in the Championship during the 2004/05 campaign, MEMS Priestfield Stadium saw a strong Cardiff side fall at the first hurdle, with Elliott List netting his sixth goal of the campaign during the final 10 minutes of the match.

The MEMS Priestfield Stadium could host another top-flight side at the end of this month.

It was their first win over the Bluebirds since May 2000, and one that puts them into tonight’s fourth-round draw for the first time in 15 seasons.

Championship title-chasers Norwich City had only lost once in their past seven home matches prior to kick-off at Carrow Road on Saturday, but it didn’t prevent League One leaders Portsmouth from picking up their first win at the home of the Canaries since their last meeting there in 2010.

Kenny Jackett’s Portsmouth spent most of the game playing against 10 men after Grant Hanley’s early dismissal, but it was substitute Andre Green’s late goal deep into injury time that put the visitors into the next round.

Portsmouth won the FA Cup in 2008 and reached the final in 2010, before eventually suffering three relegations which condemned them into Sky Bet League Two. However, after gaining promotion last season, sweeping aside their league competition so far this term and now handing out an early exit to Norwich, a good cup run could be the latest chapter of their resurgence.

Kenny Jackett’s Portsmouth side have been on the up during the past season-and-a-half.

It was a Sunday of shocks in the FA Cup; Oldham Athletic were one of three teams who beat a side plying their trade three tiers above themselves. After going a goal behind at Craven Cottage thanks to Denis Oodi early into the second half, the Latics were level inside the final 15 minutes after substitute Sam Surridge’s penalty.

With just six minutes remaining, Serbian international striker Aleksander Mitrovic was unable to do what Surridge had done eight minutes earlier, as his spot-kick was denied by Daniel Iversen.

Four minutes later, it was a header from Callum Lang on the end of Gevaro Nepomuceno’s cross which sealed a dramatic late win for the visitors, Oldham’s first win at the home of the Cottagers since 1982.

Oldham will be hoping to recreate their 2012/13 season to reach round five.

Barnet were one of only two sides from outside of the top four divisions to reach this stage, and despite the daunting task of a trip to face a Sheffield United side at Bramall Lane who were 84 league places above them, the National League outfit were not going to let that spoil their fun.

Former Tottenham Hotspur striker Shaquile Coulthirst got the only goal of the match from 12 yards, having been fouled himself by Richard Stearman. 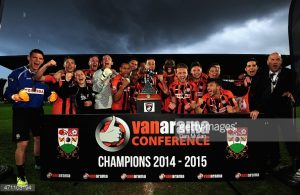 Barnet made the most of their trip to Yorkshire and are the only non-league side in round four.

It was the first-ever competitive meeting between the two clubs and one that Chris Wilder’s side will want to quickly forget.

Sunday’s late kick-off at Rodney Parade saw Newport do exactly what they did to Leeds 12 months ago, and go one better by knocking 2015/16 Premier League winners Leicester City out of the competition.

Jamille Matt opened the scoring in the 10th minute with an excellent header, one that set the tempo in a game dominated by the South Wales side.

With Rachid Ghezzal equalising late on with a stunning strike which looked set to force the tie to a replay at the King Power Stadium, Padraig Amond had the final say for the Exiles, who stuck true to their name, as the striker converted his penalty past Danny Ward to create another historic moment for Mike Flynn’s side.

Newport County manager Mike Flynn already has a history of FA Cup upsets under his brief managerial career to date.