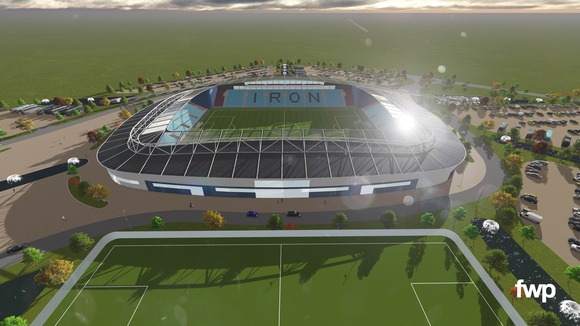 Scunthorpe United have recently revealed details about their proposed new stadium. The name is yet to be decided for the £18 million new build which is to built as part of the Lincolnshire Lakes Project, this is providing planning permission is granted and a decision is to be made on the 18th August.

The new stadium is not only concentrated on the first team but also focusing on the Scunthorpe United youth teams and the local community with extra show pitches and 3G surfaces all to be constructed as well as ample car parking available for home and away fans. Iron Chairman Peter Swann is excited and optimistic about the plans and the links that can be built as part of the proposal, saying.

“We are very happy with the deal and this is a very exciting time for the club. We’re moving forward now. We’ve had some great support from the council and are very excited to be part of the Lakes Project. This will allow us to move into a better stadium and give us the opportunity to create different income streams as we will be working with hotels and gym companies and a few other businesses. There will be good access and parking and we will be able to accommodate all the facilities on one site. It is a very exciting project.”

Scunny fans will be able to voice any queries or concerns on the matter with the Chairman of the football club Peter Swann when Preston North End come to Glanford Park for a pre-season friendly that will take place on 16th August.

Tom is a big Bradford City fan and a football league enthusiast who is currently studying sport, economics and business at A level.