Whenever any player at any club is linked to another side, there’s often a raising of objection. To some degree this is obviously expected.

The objections are raised more vocally, and sustained longer, whenever that player is a crowd favourite or is performing well. In a way, the latter often leads to players becoming not only victims of their own success but also leading to interest from others.

That is what has happened to Kalvin Phillips at Leeds United, according to Sun reporter Alan Nixon on Twitter (below). Under the tutelage of Marcelo Bielsa, Phillips has been somewhat turned from a jobbing midfielder with undoubted potential into the Whites version of Claude Makelele. 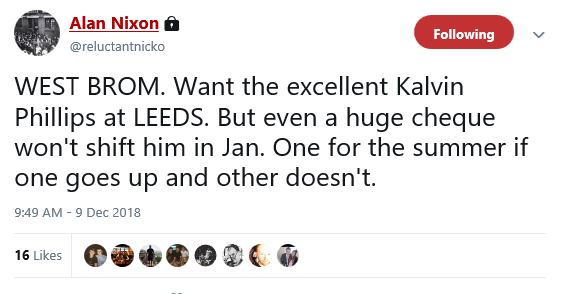 Nixon is bang on the button, Phillips has been “excellent” this season. The headline figures of goals may not be there, he’s yet to score, but the whole other side of his game is emerging. When looked at holistically, it is clear to see just why West Brom, and by extension other sides, would be interested in acquiring his services.

However, and Nixon is spot-on again, even a “huge cheque” is not likely to budge Leeds United’s resolve to keep hold of a player that Bielsa sees as integral to the game that he is coaxing the Whites to play.

As expected, Leeds United fans have responded to this ‘news’; here’s what some of them think.

I’d say this has zero chance of happening.

Not enough cabbages in the world to go there?

Bless them. Sounds like a move to unsettle a player. Imagine being unsettled by WBA.

Kalv is one of our own, he’s going nowhere Alan lad.

next step for Kalv has to be upwards not sideways

No he won’t, but I guess his agent has to look ahead?

He wouldnt go to west brom of that i can almost guarentee. To shift him from the club he loves 2 things would need to happen. 1) Leeds want to sell (which they dont) 2) a top end prem club comes knocking. Dont make stories up pal

Bet not many Leeds fans last season would have believed you if you told them we’d be scoffing at this. He’s had an absolutely outstanding few months.

The images that this final response creates. I just can’t get it outta my head…

I want Kylie Minogue in her fun kit, but life’s a shithouse.