According to the Coventry Telegraph Marcus Tudgay has been offered a contract at Coventry, after being handed a trial by League One club.

The 31-year-old forward was released by Forest at the end of the season, and has been taken on trail by the Sky Blues and has seemed to of done enough to warrant a contract offer.

Tudgay joined Forest back in January 2011 for a fee of £500k where he made 68 appearances after initially going on loan from Sheffield Wednesday, in November 2010.

“We’d like to bring him to the club and we”ve made him an offer,” ~revealed Steven Pressley

The Coventry boss believes the ex-Nottingham Forest forward can provide essential experience within his forward line-up this season.

“We have spoken to his agent and we hope that, over the course of this week that negotiations will go well and online casino canada we can get a positive outcome.”

Tudgay has had two most recent loan spe 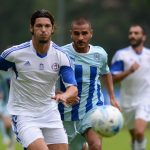 Now with this new opportunity he will now hope to lengthen his career with the Sky Blues, with boss Steven Pressley eager to strengthen his front line.