Norwich were nothing short of awful in front of goal last season and it was a big contributor in the club’s relegation, so could a youthful, confident striker be the answer? Stevie May had a fantastic season in Scotland for St Johnstone and has attracted Premier League interest as of late yet could cost less than a million pounds.

The 21-year-old scored 20 goals in 38 league games last season and whilst some fans will be nervous of another striker plying his trade north of the border, May has proven his goalscoring ability and still has room for improvement in the future. New boss Neil Adams would love to add another youthful recruit to his side and should May hit the ground running, he could be a valuable asset to a club looking to bounce straight back into the top flight.

After a season in Germany to forget, Arsenal might be more willing to allow French midfielder Francis Coquelin to leave as he may never make the grade in London. That being said, the talent is still there, a tough-tackling midfielder that also has the ability to play at either of the full-back positions is quite a rare trait.

Should he find that potential that was seen earlier in his career, the Canaries could gain a very solid defensive midfielder that will help protect a flimsy defence. Should he stay at his current level, having a utility player that can fill a variety of positions could be a real find for a promotion-chasing club, especially if injuries begin to mount up. 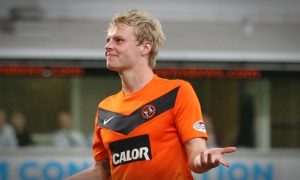 Norwich might have lost Robert Snodgrass earlier in the summer and whilst some may feel they have adequate replacements already in the squad, a player like Gary Makay-Steven would really give them another dimension. The 23-year-old Dundee United winger has impressed many clubs in England with his expansive displays last season and the player is keen for a move that would see him in the Premier League sooner rather than later.

A real box of tricks that’s able to perform on either wing, Mackay-Steven is one of the brightest talents currently in Scotland and they have high hopes for him both at club and international levels. Dundee United have a reputation for creating a few excellent players in recent years and Norwich should really look to add another player that could be a real livewire in the Championship.

The lack of goals last season detracted from another area of weakness last season, their defence. Another defender is needed and someone like Nathan Ake fits the bill perfectly whilst also having the versatility to play in midfield of at left-back if needed.

The young Dutchman is highly rated back at Stamford Bridge and has been involved in some of Mourinho’s squads later in the season. Should he be made available for a loan deal, Norwich should look to use him to add some extra quality in their defence that was so error prone last season. His ability to play with the ball at his feet is something dramatically lacking from the Canaries defence and with the added incentive of his ability to play in different positions, he should be a genuine target for Neil Adams.

Another possible loanee from Jose Mourinho’s men, Kenneth Omeruo would be a superb addition to the back line. Having had a surprisingly good tournament for Nigeria in the World Cup, Omeruo has gained even more admirers than those that enjoyed his displays with Middlesbrough late last season.

He’s reported to be available again and he has the added benefit of having Championship experience so there will be no need to wait for him to adapt to the league. Should he bring the form that he showed in Brazil, he would add some much needed steel and determination that was absent last season and could really boost Norwich’s title bid for the upcoming campaign.

Do you approve of Gerhard Struber as Barnsley head coach? Manager Approval

Do you approve of Gerhard Struber as Barnsley head coach? Manager Approval

Bradford City talks with new signings “looking promising”, but no move made for ex-Liverpool and Blackpool man