There has been much anticipation among Plymouth Argyle fans to catch a glimpse of the new faces in their reassembled squad, with no less than six new faces joining the Pilgrims since the end of last season. After a 5-1 victory away to Tavistock on Tuesday John Sheridan took his team to Calor League South side Weymouth for their second pre-season match.

The Greens fielded almost two completely different sides in either half, with Carl McHugh and captain Curtis Nelson the only men to last the 90 minutes. The side playing the first 45 minutes was in the majority a second string eleven who should have been keen to impress. In reality it was the home side who dominated possession, playing fast flowing attacking football, whilst Argyle – donning their new yellow away shirt for the first time – looked out of sorts.

The non league side deservedly took the lead with a superb 25-yard strike from Chris Shephard after Argyle lost possession deep into their own half. Nathan Thomas converted from the spot soon after as Aaron Bentley was fouled in the area, but the Greens were still looking shaky when tested in defence. Everything the League 2 side created came through Thomas who looked a class apart from not just the opposition but his own teammates as well. The other star performer was ex-Pilgrim Stuart Yetton, who scored a peach on the turn after Carl McHugh was caught in possession.

The second half saw a side which could well start on August 9th against Cambridge United, including trialist Oliver Norburn who seems to have impressed John Sheridan after his release from Bristol Rovers. Argyle were fluid going forward with the dynamic trio of Lewis Alessandra, Jason Banton and Nathan Thomas causing the home side problems. It was Alessandra and Thomas that were involved in a beautiful flowing move that created the equalizer; as Kelvin Mellor met Thomas’ cross to see the ball trickle over the line – much to the despair of the Weymouth substitute goalkeeper. There were chances that could have -and in Jason Banton’s case – should have been converted (from all of 4 yards), but that was how it ended, an entertaining match which will have left the travelling Devonians intrigued by their new signings.

Find out how the new signings looked here….

The new goalkeeper could do very little about either goal he conceded with both goals seemingly unstoppable. Was caught out under the high ball on one occasion   in which Weymouth were unlucky not to score.  Has a lot of experience throughout the lower leagues and looks like a suitable backup goalkeeping option for the season ahead.

The Donegal born man did not look convincing in the first 45 minutes, being caught in possession on numerous occasions including one instance which led to Weymouth’s second goal. A lack of pace was also apparent as the opposing strikers had the better of him throughout the first half. A switch to left back in the second half saw the ex-Bradford man put in a more solid performance. Would not be in the starting eleven on first impressions but a good pre-season under his belt could make all the difference. 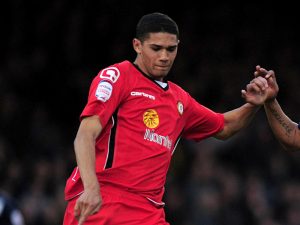 The ex-Crewe player seemed to fit in to the team perfectly and gave a strong performance. His height is a great advantage and looked very comfortable going forward, even managing a goal for his efforts. His athleticism was clear to see and looked very comfortable with the ball at his feet. Looks like a great addition to the squad and could well be one of the best defenders in the league this season.

Looks to be a solid centre back who is keen to make his mark on the opposing strikers early on. A ruthless defender but is also very mobile. Being a left footer he fits in perfectly to the hole in the Pilgrims’ defence and his partnership with captain Curtis Nelson will make Argyle a hard side to break down in the season ahead. Was also very comfortable on the ball, with many long range passes in his arsenal. Looks to be a solid signing and is clear to see why he has played further up the leagues previously.

After a slight injury concern Smalley only played the final 30 minutes, coming on as a substitute for Nathan Thomas. On first impressions he does not seem to possess the pace to easily beat a man, which was an issue when deployed on the wings. Looked more comfortable playing through the middle, but a few more games for him to rediscover his fitness will help prove himself. The jury is still out on this one.

It is clear to see why the American trialist is no longer desired by John Sheridan; the sort of player that looks like he is putting a lot of effort into a game but you couldn’t remember him doing anything of note. A poor first touch and a lack of pace topped it all off.

Looked very comfortable on the ball and had good vision with his passing. Had a fierce shot which was well saved by the Weymouth ‘keeper. Was eager to get forward which is what the Pilgrims require after the loss of last season’s captain Conor Hourihane to Barnsley. There are probably better alternatives out there but Norburn will surely be hanging around the Argyle camp for a few more friendlies yet.