As Wolves, Brentford, Rotherham all join the Championship, and Tranmere, Carlisle, Shrewsbury and Stevenage start to prepare for League Two, the new season draws ever closer.

Pre-season is well underway, so here is what I think you can expect from the seven new teams who will join League One for the 2014/2015 season.

Three teams who were relegated from the Championship and four who were promoted from League Two. 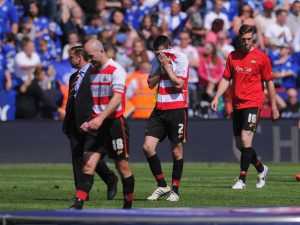 Doncaster Rovers made an immediate return to the third tier, having won the league in the 2012/2013 season. Their fate was sealed in the cruellest of fashions, when a last minute Birmingham City goal from Paul Caddis secured a point for the Blues, whilst condemning Rovers to the drop. Unfortunately, relegation has not been the only concern for the Yorkshire club. With One Direction singer Louis Tomlinson and former chairman of the club John Ryan announcing they were set to takeover the club, a statement was then made on Thursday 17th July stating that the deal had in fact fallen through. BBC Sport has reported that Ryan spoke to BBC Radio Sheffield stating that “The situation is that the crowd-funder didn”t succeed and we are very sorry about that but the real problem is with the Football League.They have made it so difficult now that unless you have a bag full of cash you are going to get turned down.”

This collapse of a deal so close to the start of the season is not good news for Donny fans. Having not made a single summer signing, yet losing striker Chris Brown to Blackburn Rovers and wingers Mark Duffy and David Cotterill to Championship survivors Birmingham City, expect a turbulent season with fans being left frustrated at what could have been. Paul Dickov will expect an immediate return to the second tier as they did two years ago, but it will be a huge ask with the likes of Bristol City, Peterborough United, Sheffield United and Barnsley all having extremely strong squads for the new season, as well as the couple of smaller teams that always take us by surprise.

After a very poor season in which they kept the least clean sheets in the whole of the Championship, Barnsley were relegated with a game to go and will play in League One this season. It will be the first time they play at this level since the 2005/2006 season, where they went on to win the play-offs and secure promotion. Whether they can repeat this feat will very much depend on them adapting to the level of football. Danny Wilson has much experience at this level having guided Swindon Town and Sheffield United to the League One play-off final.

With a staggering 14 players having been released at the end of the season, cutting costs seems to be much needed for a club who spent 8 seasons in the Championship. As well as this Tomas Cywka, Stephen Dawson, Jacob Mellis and Jim O”Brien all turned down the chance to stay on with Barnsley. To top this off the Tykes have sold last seasons top scorer Chris O”Grady to Brighton and are also open to offers for their captain Martin Cranie as well as defender Tom Kennedy. This highlights the difference in the two divisions in terms of budget. However, there have been new faces gracing Oakwell, including Sheffield Wednesday goalkeeper Adam Davies, former Plymouth midfielder Conor Hourihane and striker Kane Hemmings. They are also launching a bid for Scunthorpe striker Sam Winnall. A club this big with an experienced manager should no doubt be among one of the favourites to take the division by storm, however, Leeds, Sheffield Utd, Sheffield Wednesday and Nottingham Forest are living proof that 46 games at this level is a prospect that is never easy. Expect the team to take time to settle in the division and to deal with some major shocks along the way.

Probably should be described as the “not so newcomers.” Before achieving promotion in 2013 Yeovil Town had spent eight seasons in League One, spending much of that time trying to avoid relegation to League Two. The return of Gary Johnson, the man who masterminded their entry in to the Football League after a 108 year wait, proved to be a stroke of pure genius. In his first full season back in charge, Yeovil won the League One play-offs securing the first season in the Championship in their history. However, it seemed one step too far for the Glovers as they endured a tough season in which they lost a remarkable 31 points from winning positions. A lack of experience and a budget that would not match a lot of League Two teams meant the somewhat inevitable immediate return to the third tier became a reality at the end of  last season.

A large turn over of players has occured at Huish Park with star players Marek Stech, Byron Webster and Luke Ayling all rejecting new deals. Eight new players have joined Yeovil including former Crewe striker AJ Leitch Smith, midfielder James Berrett and back for his second spell at the club, left back Nathan Smith. As well as this, four players remain from the promotion winning side. Expect midfielders Joe Edwards, Sam Foley and Kevin Dawson to be keen to make an impression. Veteran striker James Hayter will also want to show he is still prolific at this level. Expect a season of stability, but with a manager who knows the league well, they could well surprise everyone once again.

Chesterfield secured the League Two title for a record fourth time and in the process returned to League One after two seasons away. Paul Cook guided his team to the top by three points. They conceded just 40 goals all season, scoring 71. At the end of the season four players were released by the Spireites, with many players agreeing to extend their stay after promotion. With Nathan Smith choosing to move on to Yeovil, extensions have been agreed with midfielder Ollie Banks, who scored 9 goals in 33 appearances, as well as experienced full back Ritchie Humphreys and influential winger Jay O”Shea. They have also secured the signatures of defender Sam Hird and midfielder Sam Morsy. In addition to this, they have added sacked Port Vale defender Daniel Jones who will be looking for a positive new start having had his contract cancelled due to a training ground bust up.

With the momentum of gaining promotion and hanging on to the core of their side, Paul Cook will be looking to emulate the success of Rotherham, who secured back to back promotions and are looking forward to the Championship. It is an exciting time for Chesterfield and with a winning mentality that comes from winning a championship, expect them to be a tough proposition that will be looking for a top half finish at the very least.
5. Scunthorpe United

Having suffered relegation from the Championship in 2011 and relegation from League One in 2013, If you don’t have health insurance companies you must pay a tax equal to 1% of your income in 2014 and 2. Scunthorpe United were keen to bounce back and they did so in style. After a poor start to the season, manager Brian Laws was replaced by Russ Willcox and they set an all time Football League record. 28 games unbeaten ensured an immediate return to League One losing just 5 games all season. The arrival of striker Paddy Madden from Yeovil added to the firepower, with Sam Winnall claiming the Golden Boot with 23 goals. Despite drawing an incredible 21 games, their consistent goal scoring meant that promotion was achieved on the day their fantastic record was broken with a 2 – 0 defeat to Exeter City.

The Iron have had a busy summer including signings of  Port Vale winger Jennison Myrie Williams, experienced former Blackpool midfielder Neal Bishop and Sheffield United striker Lyle Taylor. They have also offered an improved contract to top scorer Winnall, who is a target for Barnsley. He would indeed be a big loss, but with Paddy Madden still on their books and already a receiver of the Golden Boot at this level, they will be looking to launch a successful campaign and of all the promoted teams, I think they are the ones to watch with strength in depth and undoubtedly the capability to score a lot of goals at this level.

The Dale finished their strong season in League Two in third place, level on points with Scunthorpe and scored an impressive 69 goals, winning more games than the top two sides. 13 defeats, however, were there undoing with regards to the title. However,  Keith Hill and his side secured promotion to League One two years after their relegation and at the end of the season released six players including captain Peter Cavanagh. Contract extensions have been agreed for midfielder Jamie Allen, centre-back Oliver Lancashire and midfielder Bastien Hey.

In terms of new firepower, Keith Hill is working within his means and has taking a chance on 24 year old striker Jack Muldoon who last season scored 21 goals for Northern Premier side Worksop Town. It is extremely positive that the team have managed to extend many of their contracts from last season. Hill will know that they are not in a position to spend a huge amount and his ability to get a squad working together as he did last season, will be crucial. Expect Rochdale to be extremely competitive, with unknown names coming to the attention of other teams in the division.
7. Fleetwood Town

Fleetwood Town join League One for the first time in their history having defeated Burton Albion 1 – 0 in the League Two Play Off Final. In just their second season in the third tier they have achieved their sixth promotion in ten seasons. This remarkable record means the Cod Army will welcome teams like Barnsley and Sheffield United to the Highbury Stadium in league fixtures. Despite many football fans objecting to chairman Andy Pilley buying the club and gaining a series of promotions, it is undeniable that a lot of hard work has been done, and results still need to be earned on the pitch. No doubt this season will be a celebration of the club”s achievements but they will want to make their mark at the highest level they have ever played at.

Two Wembley heroes were released by Town, veteran striker Jon Parkin and defender Alan Goodhall will not play a part in League One. Their first summer signing was that of Macclesfield left back Danny Andrew for an undisclosed fee, he will be keen to make an impact at a higher level. As well as extending deals for goalkeeper Chris Maxwell, full back Conor McLaughlin and left back Stephan Jordan, they have also snapped up ex-Crawley striker Jamie Proctor and experienced midfielder Keith Southern. These signings show more ambition despite already experiencing so much success. Expect a season full of excitement for Town fans and for Fleetwood to be the team that do not quite keep to League One script.

Chelsea fans comments on Twitter with Benrahama being linked to Blues

Ex-Hull City striker linked with return to Italy this summer

Cardiff City interested in move for Republic of Ireland international