Lee Grant – Grant enjoyed an impressive 2013/14 campaign as the Rams number one after joining from Burnley on a free transfer. The addition of Eric Steele as goalkeeping coach in October seems to have brought the best out of the stopper. Grant will now want to consolidate his position as one of the best goalkeepers in the division. 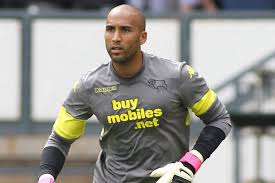 Backup – The departure of backup keeper Adam Legzdins highlights Steve McClaren’s faith that one of reserve goalkeepers Kelle Roos or Jonathan Mitchell can step up to be Grant’s understudy. Mitchell a free transfer from Newcastle and Roos who signed from Nuneaton are both highly rated, but unlikely to seriously challenge Grant for a first team place.

Craig Forsyth – Now a Scottish international, Forsyth cemented his place as one the Championship’s best left backs during last season. Always good going forward with pinpoint crossing ability, it his defensive work that has most markedly improved as he has established himself as a key player. 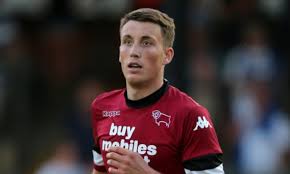 Backup – Lee Naylor will cover for Forsyth after agreeing a one year extension to his current deal. Naylor, now 34, offers experience and reliability should Forsyth pick up injuries or suspensions.

Cyrus Christie – Christie joined earlier this month for an undisclosed fee from League 1 side Coventry City. Described as a raw talent it is unclear whether it is McClaren’s intention to use Christie as first choice right back, or if another will come in on loan. The youngster has big boots to fill, replacing Andre Wisdom who impressed on loan from Liverpool last season. 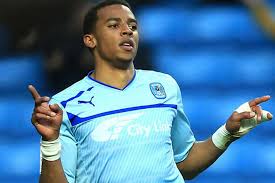 Backup – Kieron Freeman has been linked with moves away from Pride Park but will likely stay as cover for Christie if no further defensive signings are made.

Jake Buxton & Richard Keogh look set to form the defensive partnership again for Derby this season after performing admirably last campaign. The Rams did leak 52 league goals last season – more than any other club in the top six – but the lack of transfer activity in this area suggests McClaren will stick with both.

Backup – Zak Whitbread has signed a deal following his release from Leicester. He spent much of last season on loan at Derby, spending the majority of his time on the bench which can be expected to be the case again this term. Mark O’Brien and Shaun Barker also provide cover, youngster O’Brien recovering from a string of injuries that have so far blighted his young career. Barker remains way short of full fitness as he continues his road to recovery from injury suffered in March 2012.

McClaren is expected to stick with a midfield trio this season and as it stands Craig Bryson, Jeff Hendrick, Will Hughes & John Eustace, all of whom have signed new deals this summer, will battle it out for those three places in the side. If Derby are able to successfully sign transfer target George Thorne, expect Eustace to drop down the pecking order. The Rams midfield was hugely successful last season and one of the most significant reasons why they finished as highest scorers in the division. McClarens’s successful work in securing the long term futures of the midfield players is a huge boost to the side. 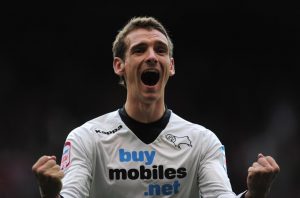 Backup – The return of Paul Coutts from long term injury is a boost for Derby ahead of the new campaign. Coutts is a hard working midfielder who will struggle to break into the 1st XI but offers a very useful option off the bench. Youngster Jamie Hanson has also impressed in a few early season friendlies and the Rams management could be looking to integrate the academy player into the first team squad. 20-year-old former Arsenal and Sevilla midfielder Alban Bunjaku should also feature in the squad after he joined earlier in the summer.

Jamie Ward & Johnny Russell ended the 2013/14 season as first choice wingers and look likely to begin the new season in the same way. Ward has extended his contract for another year, and Russell who joined from Dundee United last summer proved an excellent acquisition. Both offer pace and the ability to beat defenders at will. Russell in particular also has an eye for goal and will be looking to chip in with a good number of goals.

Backup – Simon Dawkins will be the main man to challenge Ward and Russell for a first team spot. Dawkins who signed from Tottenham initially impressed before losing his place in the starting XI midway through last season. Youngsters Alefe Santos & Mason Bennett will also look to push their way into the first team squad. Santos is a 19-year-old Brazilian recently snapped up from Bristol Rovers from under the noses of several other Championship and Premier League clubs.

Chris Martin led the line brilliantly for Derby last season after joining on a free from Norwich City. He finished with 22 league goals and will be looking to perform to a similar level this season. His link up play brings the midfield into the game and is one of the main reasons players such as Craig Bryson enjoyed such a successful 2013/14 campaign. If Martin can deliver a similar number of goals and assists this season there is a good chance Derby can challenge at the top again.

Backup – Connor Sammon remains as the only other recognised striker in the Derby squad. Despite being a hard-worker his lack of goals remain an issue, especially if Martin were to pick up injuries during the season. Speculation has linked him with a move away from the club, although this is only likely if the Rams find a suitable replacement.